For years, Darby and I have talked about how fun it would be to go to a concert together—the problem is, we don't really have the same taste in music. We finally decided that either Third Eye Blind or U2 would be enjoyable for both of us. U2 is super-expensive, so I figured that wasn't going to happen, and I hadn't heard of Third Eye Blind touring in years. A few months ago, I was listening to the radio and heard an ad for Third Eye Blind coming to town. I was so excited! They were playing at a small venue, so tickets were relatively cheap ($25). And since it was small, we were pretty close to the stage. It was awesome! I forgot to bring my camera, but concert pictures never turn out that great anyway. I figure I can always find a video on YouTube if I want to remember it.

The show brought back so many good memories. They played most of their very popular songs (except 10 Days Late—boo!). I remember listening to their first CD at my friend Melanie's house when it came out in 1997. At the time, it was very edgy, and we felt so cool listening to it. And, of course, true fans knew all the words to "Semi-Charmed Life," not just the radio version. I discovered the song "Wounded" when part of it was used in an anti-drug commercial (an irony that was lost on me until this concert). On the day of my high school graduation, I called my friend Desiree and blasted "Graduate" into the phone. Being a rule-following, naive, somewhat nerdy teenager, listening to alternative music was just about my only "rebellion" (well,
there was also my ill-fated relationship with a "skater" guy, but that's a story for another time...or never). :)

Unfortunately, Third Eye Blind is not as cool as they used to be. Most of the people Darby and I told about the concert laughed. This was very disheartening to me. They are one of the coolest bands I actually like; if they're not cool, I'm sunk. Darby told some of the students in his lab section (mostly freshmen and sophomores) about the show, and they looked at him blankly. He was telling me this, and I was like, "What?? I mean I know they were too little to remember the first CD, but their second CD, Blue, was also pretty popular, and that came out in 1999, so they would have been...7 or 8...ohhh..." Then I realized, it has begun. From here on out, it will only get worse. I'm going to be that old woman talking about stuff that no one remembers or cares about. I really did not expect this to start until age 40 or so. Oh, well. The show was really fun, so if going to it makes me an old loser, I'll just have to be ok with that.
Posted by Kayla at 6:59 AM 2 comments:

For about the past two months, I have been reading Lonesome Dove. It is a long (945 pages), dense book that was difficult to get into for about the first 200 pages. However, the story soon picked up, and I became attached to many of the characters. For the past few days, I read steadily, excited to see how the story would end. And then, last night, I turned to the last page, and it just . . . ended. Seriously, there was absolutely NO resolution for any living character. They were all miserable, and the author gave little indication of what their next steps might be. I don't have to have a tidy, happy ending by any means, but a little resolution, even if sad, would be nice. I was so mad. I literally started crying and threw the book down on the ground. I just felt like I had been cheated; I had invested so much time and effort in that book, and I didn't even get a satisfying ending? There is a miniseries based on the book; I'm thinking I might watch that. I have a feeling it will have more of a resolution, as television usually demands some sort of finality. I hope so. Otherwise, there's no telling how long it will take me to get over this.
Posted by Kayla at 4:48 PM 2 comments:

On my way to work for the past couple of days, I have heard the same commercial for Meijer, the grocery store I shop at. It's a group of women chatting, making fun of their husbands for all standing around the grill and laughing at how possessive men are of their grills. One woman says, "Yeah, but at least it keeps them out of the house." Then they all laugh knowingly.

This commercial is annoying for several reasons, but the main one is the implication that all men are just bumbling idiots who women have to "put up with." Darby and I are always annoyed at this depiction of men on TV. There's one particular commercial (I think it is for Stanley Steemer) that shows a man attempting to make a smoothie without the blender lid on. The smoothie flies everywhere as the voiceover says something like, "With kids, pets, and a husband, it's no wonder you can't keep your house clean."

These commercials do not in any way appeal to me. I mean, if men were that incompetent, why would we marry them? I didn't grow up with that model, and I certainly don't live it now. I would never think Darby incapable of fixing his own lunch, cleaning up his own messes, or operating a blender. I must confess, however, that I do sometimes tease him about his inability to find stuff in the refrigerator or cabinets...sometimes you have to move stuff around. :)

So, why is the stereotype of the bumbling husband still so prevalent? It seems like it must resonate with someone, or the advertising wouldn't be effective. Are women really living in marriages like this, where they just want their husbands to stay out of the house and out of their way? How sad. Do these commercials bother anyone else? Or, am I just taking them too seriously?

Blast from the past

So, I just rediscovered the old Xanga blog I had before I started this one. I'm not going to include the link, because, wow, it was dumb. It kind of makes me worry. In five years, when I read this blog, will I be embarrassed that I wrote it? I hope not.

Anyway, there was one choice tidbit I thought I would share with you:

Tuesday, March 15, 2005
(after a Spring Break Campaign to New Jersey)
I have decided that I NEVER want to live where it's cold. I got so sick of having to put on 30 layers of clothes every day. Snow is pretty, but only up to a point. Give me 100 degree heat any day. I guess I'm a Texas girl at heart.

It was also fun to remember some college events I had forgotten. (For that reason, I'm glad I had the blog, even if it was 95% stupid.) I had totally forgotten about the time there was a fire in our sophomore dorm on Saturday morning, and we all had to go sit in the Teague center (where there was an event going on) in our pajamas.

I had also forgotten about my famous aphorism: "You can't be sexy until you're 20." Emerald had a "little sister" through Big Brothers/Big Sisters. I think she was about 11. Anyway, one night we were all eating dinner with her at Mr. Gatti's. The girl had on a necklace that said "Sexy." And thus, the line was born. I still think it's a good rule. Although, maybe with my daughter I should say, "You can't be sexy until you're married." :)
Posted by Kayla at 5:04 PM 4 comments:

Well, I've officially turned Darby into an old man. Last night, we went to a friend's birthday party and then out to eat with some friends from church. When we got home, we we watched an episode of Seinfeld and got ready for bed. While we were brushing our teeth, Darby said, "Wow, this was a pretty late night for us." It was 11 p.m.

Tonight, we had a guy from Darby's lab, his wife, and their little boy over for dinner. They had to leave pretty early to get the boy in bed, so Darby and I went to Starbucks afterward. On our way home, Darby said, "Do you want to play a game when we get home?" I said, "Sure." Then he said, "Oh, it's already 9:30. Never mind." It's not just me anymore! :)
Posted by Kayla at 10:50 PM 2 comments: 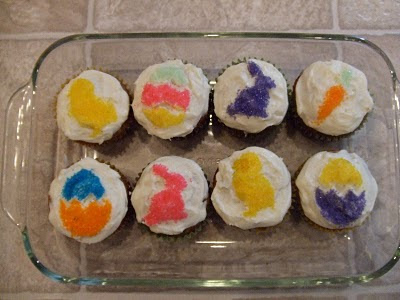 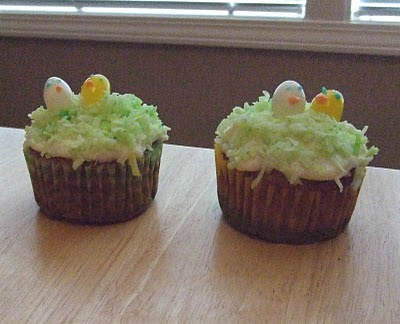 I made these cupcakes for our small group tonight. I am probably more proud of them than is appropriate, but I just think they're so cute! The top ones I made with stencils that Debby gave me in my stocking at Christmas. And I stole the idea for the bottom ones from a magazine (I think Family Circle).

I spent all weekend cooking. Without realizing it, I signed up to bring dinner for our small group on Sunday and dessert for my women's Bible study on Monday. So yesterday and today I made 3 9x13 pans of chicken and rice, carrots, 2 dozen rolls, 2 dozen cupcakes, and a pan of cheesecake bars. I'm tired! Of course, most of that is probably my fault. It's not like I had to spend 4 hours decorating cupcakes. :)

Hope you all had a wonderful Easter. We didn't do much to celebrate (besides going to church, but that's not out of the ordinary). I always think it would be nice to do a big meal for Easter, but I don't know how I would get it all done after church. Darby and I will NEVER miss our afternoon nap, so we have to be done with lunch by 2 at the latest. Usually, we're done eating and in bed by 12:30 or 1. I've thought about doing a nice breakfast, but that would involve getting up early. I guess I'm just too lazy to celebrate Easter (until I have kids that is, I'll get up early for them).
Posted by Kayla at 9:01 PM 2 comments: