Now that Jonas has passed the one-year mark, I'm no longer writing monthly posts about his milestones. But, I still do want to post fairly regularly so I can remember what he was like at each age.

I'll be honest. 12-14 months was a pretty difficult time - probably the hardest stage other than newborn. I felt like Jonas was grumpy most of the time, and would often express his displeasure loudly. Mealtimes were especially trying, with Jonas squawking at Darby and me and until we somehow figured out what he wanted. And heaven help us if we had to spend time cutting up his food. Actually, during this time, he was probably acting like a normal baby. But he had been such a good baby that we weren't used to it. If he cried a few times during the day, it was like he was a monster. We were so spoiled!
But then, just before 14 months, he learned how to walk. And as he's gotten more proficient, he's become happier and happier. He never really took to crawling. He only got up on to his hands and knees after he turned 1, and even then, he wouldn't do it very often. So, he was pretty frustrated with his immobility. Now that he can get around on his own, he's back to his old, laid-back self. He walks with his pudgy tummy sticking out and has as much lateral movement as forward, so it's quite comical.

Now, I would say this is my favorite age so far. His development has just exploded. His first word was "ball", which was quite an obsession for several weeks. I am not exaggerating when I say he would say it at the very least 200 times a day. My aunt came and visited and said it was probably more like 200 times an hour. He still loves that word (and playing with balls), but he can say quite a few others now - mama (very stingily), dada (all the time), book, bath, block, apple (ba-ba), banana (nana), cheese (tsee), chip, papa, down, thank you (dee doo), no. He likes to point to noses and say "no." He is also obsessed with belly buttons and will try to pull up people's shirts to find them. He can point to our ears and eyes when prompted. He says quite a few animal noises. My favorite is "mbooo" for cow.

He loves books, although he rarely will sit still for a whole reading. He prefers to turn the pages very quickly, so books with few words are best. He sometimes becomes frantic, bringing us book after book after book very quickly, like he thinks he has to read all of his books in one sitting.
His favorite pastimes are taking all of our books off the bookshelves, taking all of the tea bags out of their box, and taking all of his socks out of his sock basket. (Do you notice a pattern?) He also enjoys playing the piano and building with blocks. 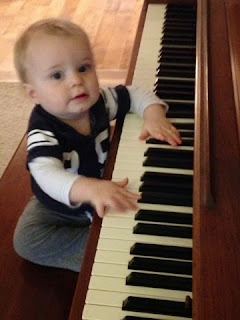 He is much more cuddly than he used to be and rests his head on our shoulders whenever we pick him up. He still loves to play with hair - his own or ours - especially when he is sleepy. He also is still a dedicated three-finger sucker. That is going to be a very difficult habit to break, I'm sure, but right now it is still cute.
He also still loves to eat and surprises nearly everyone with his huge servings. Favorite foods are apples, cheese, Goldfish, peanut butter sandwiches, and frozen berries. Vegetables are not popular, so I'm having to get creative in how I present them. He still does not like citrus fruits. Any time I eat a clementine, he asks for a piece and then spends several minutes trying to work up the nerve to actually eat it. He always spits it out. He really wants to like them because they look like balls, but he just can't get over the taste.

There are still challenges, of course. He has started hitting when he gets angry or excited. And he recently went on a week-long nap strike, which was very trying. But, overall, I'm really loving this stage. It's awesome to see both his productive and receptive vocabulary growing daily. He is starting to show us affection in return, which is really rewarding. For the first time since he was born, I find myself wanting to freeze time so we can stay in this stage a little longer. 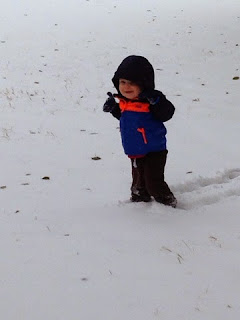