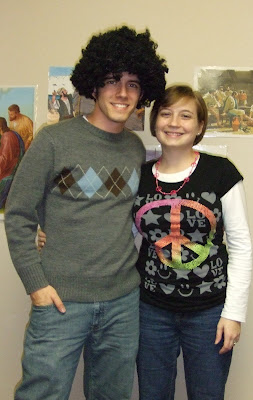 We had our Fall Festival at church last night and the college group room's theme was '60s and '70s. I didn't want to spend much money or time on our costumes, so I went to Wal-Mart hoping to find a couple of cheap tie-dyed shirts. Well, I found a lot of "60s-ish" girls' shirts, but I couldn't find anything for Darby. So I just got him an Afro wig. :) You can't see it in the picture, but it had a purple pick in it.

I didn't think the kids were really going to "get" our theme, but they seemed to enjoy it. We had a disco ball and were playing a '70s disco mix CD. Several of the kids started dancing. And one two-year-old wouldn't leave the room the whole night. She was mesmerized by the pattern the disco ball made on the walls. When her mom finally told her she had to leave, she said, "I'll be back. Don't stop the music." So cute!

Last year we had quite a few trick-or-treaters at our house, so I'm hoping we'll start seeing some in just a little bit. I love passing out candy!
Posted by Kayla at 3:27 PM 3 comments:

So it hit me the other day that on my next birthday I will be 25. I don't think that's old or anything, but it does seem strange to me that I'm in my mid-20s. Time seems to be going by so quickly. In December, it will have been 3 years since I graduated from ACU. 3 years! I've started feeling like I'm not really taking advantage of this time of my life. I won't have too many more years of married life without children (I hope!). And by "not too many," I mean 5 or 6, so don't get too excited. :) I don't want to look back at this time of my life and think, "I should have done this or that." (And I'm realizing that I probably won't say, "I wish I had watched more Toddlers and Tiaras.") So I decided to come up with a list of 25 goals to accomplish before I turn 25 (in a little under 8 months). Well, 25 was a little ambitious; I made it to 13. Anyone got any suggestions to fill out the last 12?

Out of the mouths of babes...

This weekend, I was baby-sitting a friend of mine's daughter. She's a very spirited, very perceptive almost five-year-old.

We were playing with her stuffed animals. She was pretending to be the baby ladybug (a boy, for some reason), and I was the mommy ladybug. Here's how the conversation went:

Baby: (crying softly) I don't want to grow up because I don't want to leave you, Mommy.
Mommy: I'll always love you, though, even if you don't live with me.
Baby: No you won't.
Mommy: Yes I will. I'll always be your mommy.
Baby: But it will be different. I'll have a wife, and that's like a different type of mommy.

I was trying so hard to stifle my laughter. What do you say to that? I just hope Darby considers me a wife wife, and not a mommy/wife. :)
Posted by Kayla at 9:44 AM 4 comments:

I have found a new addiction in the world of frugality—free samples! At first, I kind of scoffed at this. I mean, can you actually save any money on little trial-size items? But, I think I have. Here is a partial list of the things I've gotten for free in the past few months:

There have been others that I'm forgetting, I'm sure. Anyway, it's so fun to see what's in the mailbox each day! And, I think all total I've probably saved at least $15, which isn't too bad, considering all I do is fill out a little online form. Plus, many of the samples come with high-value coupons, so that's even more money saved.

I only sign up for samples of stuff I would actually buy or use. Otherwise, it can get a little crazy; there's so much free stuff out there. My friend Jenn e-mails a list of freebies every Friday, and I find lots of deals on Hey, It's Free, Money Saving Mom, and Deal Seeking Mom. One note of caution: If you do sign up for freebies, it'd probably be wise to set up a separate e-mail account just to put on online forms. I did not do that, and I've noticed a big increase in the amount of Spam I get. Luckily, I use Gmail, which has a good Spam filter, so it's not too much of an issue.

I just finished reading The Unlikely Disciple: A Sinner's Semester at America's Holiest University. It is written by a journalism student at Brown who transferred to Liberty University (Jerry Falwell's university) for a semester to see what life at a Christian college is like. It's a thought-provoking and entertaining read. I would recommend it to anyone who is interested in how non-Christians view Christians. The writer is not out to make fun of evangelical Christians; he does a good job of recounting his good and bad experiences. He really enjoys the sense of community at Liberty and the sincerity and kindness of his fellow students. However, ultimately he cannot get past what he considers the judgmental nature of Christians. He is especially dismayed by the overt homophobia that is displayed by almost everyone. That is a tough objection to contend with. I think treating all people, no matter what their beliefs or lifestyle, with respect and kindness is a step in the right direction. However, I think there will always be a problem when a religion that has moral absolutes meets a morally relativistic culture. It's a tough problem . . . one that Christians will have to do a lot more thinking about.

The most disturbing part of the book to me, though (as I am already familiar with the overt homophobia and sexism present in the Christian community) is the lack of academic rigor at Liberty. The author does point out that Liberty University is one of the most conservative Christian schools in the nation, which I appreciated. I don't want people to get the idea that all Christian schools are like that. Besides the fact that Liberty teaches some pretty indefensible "science" (namely, young-earth creationism), from what the author says, there is just a serious lack of critical thinking or questioning, skills that are central to a liberal arts education. For example, an examination in the course "History of Life," includes these true-or-false questions.

Evolution can be proven using the scientific method. (False)
Science is the only way to truly know truth about the world. (False)
Noah's Ark was large enough to carry various kinds of dinosaurs. (True)

Those are not true-or-false questions! The second one has some value (if it were worded better), but only as an essay question or discussion. I have no problem with matters of faith being taught at Christian universities . . . obviously, I took Bible classes at ACU. But matters of faith or speculation (such as the size of Noah's ark) cannot be presented as fact in an academic context. If someone wants to disagree, they have to be able to, as long as they can present a well-reasoned argument for their case. Only questions about the Bible that can be answered from the text itself should be posed as closed-ended test questions, in my opinion.

Anyway, when I wasn't busy being outraged, I really enjoyed the book. There are plenty of light-hearted moments, too. Like when the author doesn't know how he will be able to list the books of the New Testament in order for his test, and everyone is shocked he doesn't know "the song." It's fun to think about all the traditions that those of us who grew up in the church just take for granted.
Posted by Kayla at 8:33 PM 1 comment:

Fast forward to last night, I was sitting on the couch looking at facebook. In the little section that tells which of your friends' birthdays are coming up, I see: John Pierce--Oct. 5. Then, it hit me. Em's birthday is March 5. Our freshman year of college, we had this little joke that everyone's birthday was either on the 5th or 20th because most of us were born on one of those days. So, somehow I got it in my head that Em's birthday was Oct. 5. I jumped up to call her, hoping she hadn't already gotten the card. Well, she had. She said, "I'm so glad you called. I wasn't sure what I should do. I thought, 'Should I call Kayla? Is she ok?'" We got a good laugh at it. I wish I had seen her expression when she opened that card. I told her not to expect anything in March. Only one card per year, even if it is 5 months early. :)

How early can Alzheimer's start?
Posted by Kayla at 6:27 PM 4 comments: