A Visit from the Goon Squad by Jennifer Egan
My friend Kalyn bought this book for her brother, but he had already read it, so she gave it to me. Lucky me. :) The style of this book was interesting; it was almost like a short-story collection, rather than a continuous story. I just couldn't get into it, though, because the characters weren't very likable. The last few chapters got more interesting, as they revealed the author's perspective on what our world will look like in 20 years---quite incisive and ultimately a satisfying ending. This confirmed my suspicion that, overall, I'm just not literary enough to enjoy Pulitzer Prize-winning books. I want to like them, but they're never my favorites.

How We Decide by Jonah Lehrer
I'm really into pop psychology books. This was a fascinating look into the large role that emotions play in our decision-making process. One of the main premises of the book is that people often overthink decisions, when their "gut feelings" are actually quite reliable. I'm definitely guilty of this. This book overlapped some with Blink by Malcolm Gladwell, which is also excellent. I recommend both of them.

The Secret Holocaust Diaries by Nonna Bannister
This book is the compilation of the personal diaries of a woman who was a teenager in Russia at the time of the Holocaust. She kept a record of her experiences but didn't compile and translate it into English until she was an old woman, and didn't want it published until after her death. I don't think I've ever read about WWII from the perspective of a Russian, so that was interesting. It was, obviously, quite a sad book, but Nonna's faith and optimism were inspiring.

Spoken from the Heart by Laura Bush
I gave this book to my mom for her birthday and then promptly borrowed it. :) Although it was a bit too long, I really enjoyed learning more about Laura Bush's life. It was also interesting to find out what really goes on in the White House. I had no idea just how insecure everyone in D.C. felt after 9/11. I remember reading a review of this book right after it came out. The reviewer basically said that she liked the book but she wished Laura hadn't used it to defend her husband's policies. My first thought was, "Of course, she's going to defend her husband." I don't blame her at all. This book was a great reminder that all of our presidents and first ladies are real people with real feelings, and we should be much slower to attack their character or personality based on what we hear or read.

Countdown: The Race for Beautiful Solutions at the International Mathematical Olympiad by Steve Olson
Darby had read this book a while ago and recommended it to me. On the surface, it's the story of the U.S. team's performance at the 2001 International Mathematical Olympiad, an extremely difficult math competition for high school students. The profiles of the students are interesting, and, even if you don't understand the problems discussed (like me), you still get the general concept. But, what was really fascinating to me was the discussion of the nature of "genius." The author, and other experts quoted in the book, lean heavily toward practice, not innate talent, as the determining factor for success in any field. A very interesting read, especially if you're a nerd like me who enjoys books and movies about academic competitions.

Pictures of You by Caroline Leavitt
This was a free or cheap offering on the Kindle. It was a compelling story about a woman who accidentally kills a young mother in a car accident and then becomes entangled with the woman's widowed husband and son. But, at times the plot was a bit far-fetched. A decent beach read but not very substantial.

The Problem of Pain by C. S. Lewis
This has been on my "to read" list for years, but it wasn't until I borrowed it from my brother that I got around to it. In all honesty, I was a bit disappointed. I struggle a lot with theodicy, and I (admittedly naively) thought this book might be the answer to all those doubts. It was not. I thought some of his explanations were a bit of a stretch. But, it gave me a lot to think about, and I do like his perspective on Heaven and Hell.
Posted by Kayla at 1:56 PM 1 comment:

One of the things I found surprisingly refreshing about The Hunger Games movie was that the heroine (played by Jennifer Lawrence) was not rail-thin. I felt like she looked a little more like me than most female stars. (Notice I said "a little"; I haven't deluded myself into thinking I'm that fit!)

So, it angered me, although it didn't really surprise me, to hear that many reviewers had criticized her as being too big to play Katniss. Oh, sure, they justified it by saying that Katniss is supposed to be starving for most of the novel. But, the same thing applies to the male actors, who aren't scrawny, and no one's criticizing them. The scrutiny women receive about their weight is completely ridiculous. And the range of acceptable weight between "too thin" and "full-figured" (which, let's be honest, is not usually used in a positive way) seems to be minuscule.

I like to think I'm not affected by this pressure to be extremely thin. But, I don't think that's true. I've gotten back on the eating healthy/exercise bandwagon, and I'm creeping closer to the lowest weight I've been in the past 6 years, at least. I plan to stop at that point. I feel good about the progress I've made, and I know I'm healthier. But still, still I find myself pinching fat in the mirror, thinking that my thighs are a little too big, wishing I had a flatter chest so I could look smaller. I know it's crazy, but I still do it. (I realize this sounds a little bit like I'm developing an eating disorder, but I'm definitely not close to that.) I'm just always thinking (and I think many women think the same way): I'll be completely happy with my body when I lose 5 pounds, or completely eliminate my love handles, or get rid of all of my arm flab. But, it's not true. Even if I did accomplish all those things, I'd still find something to criticize.

And I think that disparaging comments about beautiful, healthy women do contribute to this constant identifying of flaws in my own body.

As I get closer to (hopefully) having children, I think a lot about the example I want to be for them. And, if I have a little girl, I definitely don't want her to be critical of her appearance. So, if I don't want it for her, why would I want it for myself?

So, I'm resolving right now to try to reduce the amount of time I spend thinking about what I need to "fix." I still think it's important for me to maintain my weight, because this is my natural weight when I eat healthily and exercise regularly, which I should be doing all the time. But, I don't want to spend time identifying flaws or bemoaning things about my body that are never going to change. There are so many better things I could be thinking about. Like knitting! :)
Posted by Kayla at 9:38 PM 1 comment:

Well, I did not get near as much work accomplished during Spring Break as I planned to (surprise, surprise), but I had fun, so I guess it's ok. Some of the highlights after our Madison trip:
It was hard to go back to school this morning. But, it's less than two months til summer and our trip to Italy. Yippee!
Posted by Kayla at 8:46 PM 2 comments:

Troll capital of the world (and Madison)

Mica and Harrison were kind enough to invite us along on their Spring Break getaway to Madison. So, we set off on Sunday morning and soon arrived at the Edgewater hotel, which is the self-proclaimed hotel of choice among "visiting celebrities to Madison." Alas, we didn't see any celebrities, perhaps because it's the off-season.

We explored downtown and the campus area and then enjoyed dinner at The Old-Fashioned, where we had amazing cheese curds, and I had the mac and cheese. Then, because we hadn't had enough dairy, we enjoyed some delicious Madison ice cream from Chocolate Shoppe. 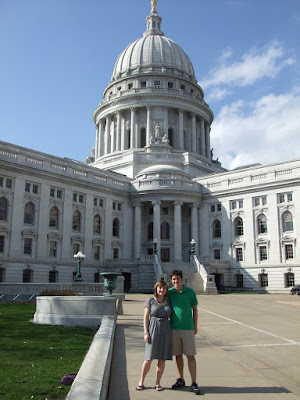 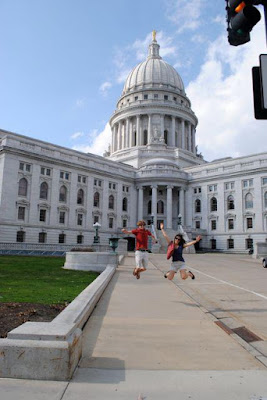 Harrison and Mica. They're way cooler than us. 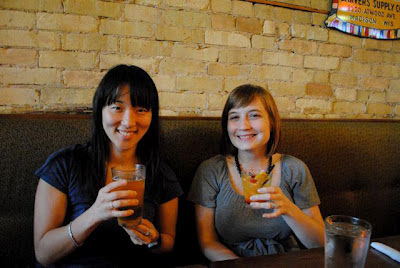 Mica and me at dinner. On a whim, I got my hair cut short again.

Saturday, we had breakfast at Magnolia, then wandered around downtown in the rain before deciding to drive to the Cave of the Mounds, the "premier cave of the upper Midwest." I'm not sure how many caves it's competing against, but it was pretty cool. Mica dazzled us all by correctly answering all of the guide's questions. 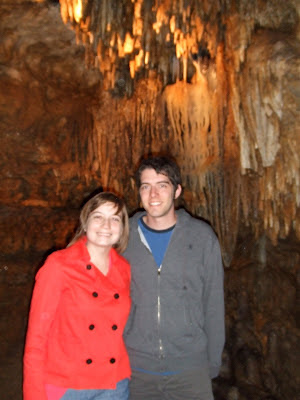 Me and Darby under the stalactite "chandelier." It was pretty cold in there.
While there, we saw advertisements for the Wisconsin "Trollway" and were too curious to pass it up. So, we drove a little ways to Mount Horeb, which was the cutest little town. It has a large Scandinavian population, and there are tons of cute shops and restaurants. Plus, there are like 15 troll statues scattered across town. We never found the elusive "bonus troll," although I'm sure we made some bank employees' day when we wandered into the lobby in search of the troll. I've decided that, if we can't live in Texas, I'd like to live in Mount Horeb, where I would spend all day eating cheese curds and ice cream and visiting all of the trolls. 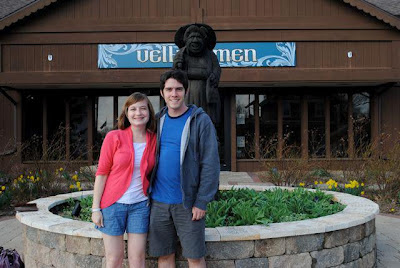 One of the many trolls. It looks a little creepy, but we were assured that they are friendly trolls.

It was a great getaway and made my Spring Break not completely boring. I always feel a little nervous before going on a trip with other people, but it worked out marvelously. We all love to eat, and we've now discovered a shared passion for spotting troll statues. Who knew? Perhaps the most amazing thing about this trip was that I didn't plan it! Mica and Harrison made our hotel reservations, drove us there, navigated the city, etc. We were just along for the ride, and I loved it.
Posted by Kayla at 8:18 PM 2 comments:

Well, I didn't mean to leave that sad post up for so long. I'm feeling much better now. Things have just been busy, and I haven't had time to post. A few good things from the past two weeks: 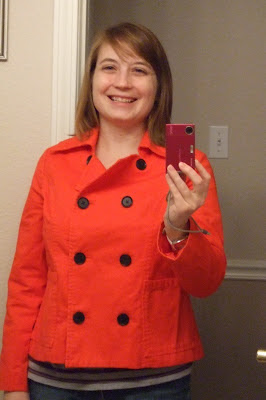 My new jacket. I'm laughing because I feel so stupid taking my own picture in the mirror.
Posted by Kayla at 1:32 PM 3 comments: