So far, my summer has actually been kind of stressful. I started a two-week intensive Spanish course on last Monday. I'm really enjoying it, but it's 3 hours per day and that, combined with my 10 hours of tutoring per week (and the 10 different lesson plans required), my GA, and a new baby-sitting job have left me with much less free time than I anticipated. After this week, things should slow down quite a bit, though. And Darby and I are looking forward to a mini-vacation to Madison, WI over the holiday weekend.

Even though it's causing me a little stress, I'm so glad I decided to take this Spanish class. It's very focused on conversation, and that's what I desperately need to practice. It's sad to realize how much of my vocabulary I've lost through lack of use. I'm definitely motivated to practice more on my own. I'm also realizing that all of my ESL courses have really changed the way I look at learning languages. Before, I kind of thought of learning Spanish as a finite goal. One day, I would wake up and say, "I know Spanish." But now I view it much more as a continuum. I'll always be learning Spanish. In some ways that is daunting, but it's also very freeing. Before, I had somewhat unrealistic expectations about what I could achieve in Spanish. But now that I've worked with students who have been learning English as a second language for many, many years, I see that perfection is unrealistic. My goal should be to communicate effectively. I'll always make mistakes, but that shouldn't stop me from speaking with native Spanish speakers. And I have so much more empathy for the international students I work with now. After three hours of listening and speaking solely in Spanish, my brain is fried. Next, I want to take some courses in a language from a completely different language family (e.g., Korean, Mandarin, or Arabic). I think that will help me identify even more with my students.
Posted by Kayla at 8:31 PM 1 comment:

Well, I finished my first year of grad. school on Friday. I can't believe I'm already halfway done. Time is really flying by. I am still so incredibly grateful for the opportunity to go back to school. And I absolutely love working with ESL students. This summer, I'm continuing some tutoring that I started this semester. I really enjoy getting to know all of the students and seeing them improve.

Darby reached a huge milestone this semester. He is now completely done with his coursework. So, for the next two years, he'll be doing full-time research and dissertation writing. I'm so proud of him for all the hard work he's put in so far, and I'm so excited that he'll no longer have homework!

We had a great first weekend of summer (even though it's COLD! I had to turn the heater back on tonight. Boo.). On Friday night, we had a celebration dinner at Crane Alley, one of our favorite local restaurants, and then, being the huge nerds we are, we worked a puzzle. :) Saturday morning, we got up and walked to the Farmer's Market and then had coffee at a little cafe near there. I grilled steaks for dinner Saturday night and then watched a chick flick (New in Town) while Darby hung out with some guys from the lab. After church this morning, we went with our preacher's family to the brunch buffet at Kennedy's. Yum! There was soo much food, and it was all delicious. It's so nice not to have to worry about homework for a little while. I think this summer is going to be awesome!
Posted by Kayla at 8:05 PM 2 comments:

So, this weekend the ACU group had a belated Cinco de Mayo celebration. And, I think Erin and I might have found the ideal entertaining arrangement. She hosts, and I cook. The party was at their house, but I brought all of the fajita ingredients and used their grill. It was so much less stressful than having to cook and clean the house. And I didn't have to feel guilty for being "in the zone" when I was cooking, since I wasn't the official hostess.

Austin and Erin got a pinata for us, and it was soo fun! I think perhaps spinning 10 times around the bat was a little much, though. Both Darby and Liz fell over, and I almost did. 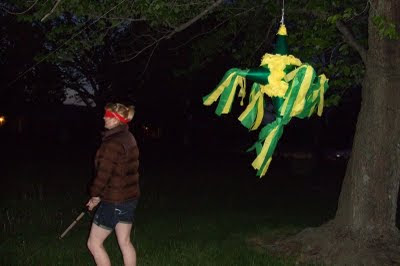 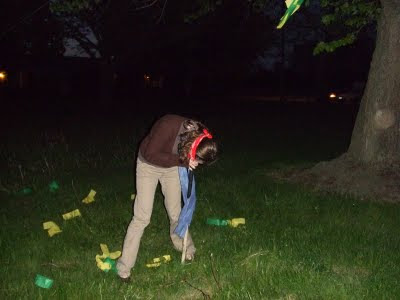 Liz, pre-falling down. The streamers on the ground are from my ferocious hitting. :) 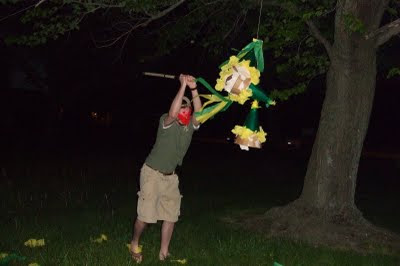 Austin, putting an end to it. Actually, Liz was the one who busted it open, but we hung it back up, so everyone could have a turn.

On Saturday morning, Liz invited me to a brunch/clothing swap at her church. It was a lot of fun; I got a few cute new things, and, more importantly, I got rid of a lot more things. I made these raspberry breakfast bars, and they were so good! 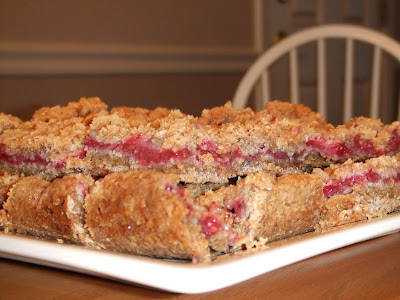 Normally, when I try to transfer bars from their baking dish to a plate, I end up with a crumbly mess. But these actually turned out looking pretty decent. I think the secret was lining the pan with parchment paper, then buttering the parchment. And, the bars are healthy because of the raspberries. :)
Posted by Kayla at 2:07 PM 1 comment:

Hope for the Future

Riding the bus every day gives me a lot of opportunities to people-watch (and eavesdrop). Often, this is a little depressing. But, every so often, I see something on the bus that just makes my day. Today was one of those days.

A group of 18 4th-graders (mostly boys) got on the bus with their teacher. I assume they were taking a field trip to the university or one of the public libraries. Anyway, this group of boys spent the whole bus ride bragging about their Accelerated Reader scores. They were asking this one kid how he had managed to accumulate so many points, and he said, "I just love to read." They asked him why, and he said, with complete sincerity and the biggest brown eyes I've ever seen: "Because reading is an adventure. When you read a book, you can go anywhere." Another kid said, "Yeah, but you could be playing video games or playing outside." And the little bookworm said, "No, you don't understand. You can go anywhere. I just ignore everything else around me. One time I got grounded for reading too much because I wasn't listening to anyone." And, except for the one dubious boy, the other kids were hanging on to every word and seemed truly envious of the boy's reading ability. It was the cutest thing I've seen in a long time. So, don't believe people when they talk about kids these days just wanting to play video games or text. If this group of boys was any indication, I'm very impressed with the next generation. (Gosh...am I really old enough to be part of an "older" generation? Scary.)

My experience is in sharp contrast with an experience Darby had several months ago. On his way home, he was reviewing some notes in his lab notebook. A group of middle-school boys was sitting near him. One of them read the title on the cover out loud: "Laboratory Notebook." Then, he turned to his friends and said, "Nerd!" Poor Darby. :)
Posted by Kayla at 10:31 AM 3 comments:

My parents came to visit this past week. Because of Dad's crazy work schedule, it ended up working out better for mom to fly in on her own on Tuesday night. It was wonderful to have her here for more than just a weekend. We had fun shopping, getting pedicures, going out to lunch, and talking, talking, talking. Of course, I had to go to class, but Mom was so sweet to drop me off and pick me up, and it was so fun to come home to a non-empty house (just like growing up!).

Dad flew in from a business trip in Boston on Friday night. On Saturday, we enjoyed breakfast at Steak & Shake, a quick look at the U of I botanical gardens, game playing, an early Mother's Day/mom's birthday celebration, and watching Source Code. I had really been missing my parents, so I was so glad they were able to come. It really means a lot to me that they make it a priority to visit, even when their schedule is busy. And it's less than 2 months until we see them again in Texas! Yay! 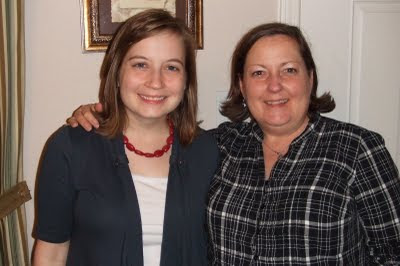 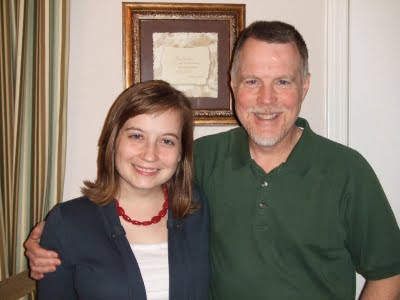