Monday was my last first day of school (probably). Of course, I thought the same thing last August. :) I definitely won't be staying another year, so I'm pretty sure this is it. I'll never say never to the possibility of getting a Ph.D., but as of now, I just don't see it. My enthusiasm for school has waned quite a bit since my freshman year of college nine (how can that be?) years ago.

Today, I was running to my Spanish class (love it when the bus is late), and a girl I was walking beside asked me what class I was going to. It turned out we were headed for the same class. She said, "Are you a freshman, too?" It's a comfort to know that, even though I sometimes feel like a senior citizen compared to the college kids I see every day, I still look like an 18-year-old.

I feel like I look a little older, but I guess I haven't changed that much. What do you think? I'm getting very mixed messages. The other day I got off the elevator in my building and a student came up to me and said, "Excuse me, ma'am. Can you tell me where room 4002 is?" So, she obviously thought I was an instructor. And when I was interviewing incoming international students, two of them called me "madam." Ha!

This weekend, I met Brittany and Erin, two of my Fat Tuesday girlfriends, in Las Vegas for a mini reunion. We had tons of fun exploring all of the hotels, seeing Cirque du Soleil, eating our weight in ice cream and cake, and playing penny slots. 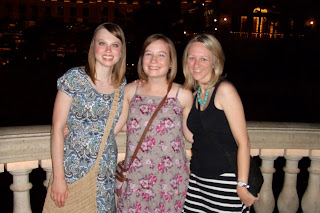 It was so great to spend time with these girls. Our similarities really came out this weekend. To name a few:
We were destined to be friends.

In my quest for a stress-free (or at least stress-minimum) Christmas, I decided to make my Christmas cards this summer. I enjoyed it so much more than I have in the past because I wasn't rushing. There was only one downside: As I was working on them, I kept getting really excited thinking that Christmas was just around the corner. Then, I'd remember it's August and I still have an entire semester of school to complete before Christmas. Very sad. I resisted turning on the Christmas music while I was working, but it was very tempting. I love Christmas! 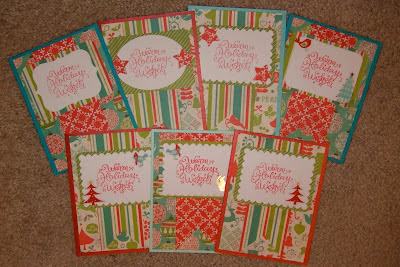 As many of you know, Mica taught me how to knit in March. I thought I would enjoy it, but I had no idea how much I would love it. It's very addicting. Even so, my first project took quite some time. I started a scarf but ran out of yarn before it was long enough. When I went to the yarn store to buy a new skein, they were out of that color and wouldn't order any more. I was so dejected. I left the store crying, and put my scarf away for about a month. My sister convinced me to just continue it with a contrasting color. So, off I went. I figured out how to join the skein, but I realized I wasn't going to like how it looked. So, even though it pained me, I ripped the entire thing out and started over, this time making it narrower. It went much faster the second time around and looked more consistent.


For my second project, I decided to go up one level of difficulty and do a ribbed headband. After much trial and error, I figured out how to do ribbing, and I'm loving the way it looks. I think I'm about halfway done. As with most of my crafty projects, I am perhaps more proud of this than is appropriate. Ribbed fabric is so cool because it's very stretchy. 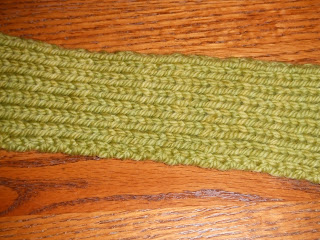 Knitting fits in very well with my other favorite pastime: watching the Olympics. I've been happy as a clam for the past week sitting on the couch all evening long. Now, I just have to decide what project to do next!
Posted by Kayla at 2:57 PM 3 comments:

The Amazing Adventures of Kavalier and Clay by Michael Chabon
Darby read this book a couple of years ago, and I asked him to hang on to it so I could read it. Although it starts out a little slow, this story of two cousins who create a famous comic book series in WWII-era New York picks up in the middle and then veers off into an absurd side plot before the touching ending. I enjoyed the relationship between the two main characters, but the book was about 200 pages too long. Further evidence that I don't enjoy Pulitzer-prize-winning books. Why do I never learn?

Interrupted: An Adventure in Relearning the Essentials of Faith by Jen Hatmaker
I had heard good things about this author/blogger, so when one of her books was offered cheap on the Kindle, I decided to try it. This woman and her husband worked for an unspecified mega-church when they felt that God was calling them to completely change directions and start a church that would focus on reaching out to the "unchurched" in Austin and becoming an integral part of their community. This book really resonates with where I am in my spiritual journey right now, as I think that most Christians (myself included) are doing a poor job of "loving our neighbor." One point that really hit home with me was that many Christians are so burned out on church because we're constantly "blessing blessed people who should be on the giving side of the equation by now." Yes. I think, in general, the church has become very inwardly-focused. We're more concerned about making sure that everyone believes the same thing and policing morality than forming relationships and serving others. This was a very convicting read.

Dinner: A Love Story by Jenny Rosenstrach
Kalyn highly recommended this book, and I had some Amazon birthday gift cards, so I ordered it. It's a combination cookbook/memoir (my absolute favorite genre) about the joys of family dinner. The author writes about how dinner has evolved as she and her husband have moved from childless couple to parents of two children under two to parents of school-age children. She encourages readers to make home-cooked dinners a priority even when work and other commitments take up time. Jenny is very funny and not at all preachy. This book just makes you feel good about cooking.

The Land of Later On by Anthony Weller
In this small, strange book, a man commits suicide and finds that there is indeed an afterlife, but it's nothing like anyone expected. With the help of Walt Whitman(!), he embarks on a time-traveling, continent-jumping journey to find his recently-deceased girlfriend before she gives in to pressure and chooses to be reincarnated. It is a weird story, but I found it quite engrossing.

A Heart for Freedom by Chai Ling
This memoir was written by one of the student leaders of the Tiananmen Square protest. I was woefully ignorant of this event. Now that I teach mainly Chinese students, I've become more interested in China's history. It was very interesting to read about the events that led up to the massacre from someone who was in the center of it all. Chai Ling escaped political retribution in China and moved to the U.S., where she married an American. There is a lot of controversy surrounding her role in the protest. Many argue that she saved her own life at the expense of the students who were under her leadership. She wrote this book to tell her side of the story and to share about her conversion to Christianity. Now, she runs a non-profit organization dedicated to stopping child sex trafficking and forced abortions and gender-selection abortion under China's one-child policy. Chai Ling's story is very interesting, but the book is a little disjointed. At the end, in the acknowledgments, Chai Ling thanks her editor who helped cut almost half of the book. I think the editing job was rushed, and some necessary sections were cut. This was a good introduction to recent Chinese history, but I'll definitely read other perspectives.