I can't seem to keep up with posting the books I've read on a monthly basis, so perhaps I'll just do it quarterly or so and only include the ones I really liked.

Rules of Civility by Amor Towles
This was a book club pick. On the surface it sounded kind of boring to me: a young working-class woman befriends a rich guy and ends up enmeshed in the high society of 1930s New York. And, really, not too much happened in the book. But the writing was so good that it was absolutely mesmerizing. This is the author's first book, and I can't believe it's so good.

Orphan Train by Christina Baker Kline
Another book club book. This novel alternates between modern times and the 1930s. A young girl who is about to age out of foster care befriends an elderly woman and learns the story of the woman's journey on the orphan train and her subsequent foster families. The story was surprisingly compelling - I kept wanting to read more even though it wasn't particularly suspenseful. The historical storyline was much better written than the modern one, but both main characters were very relatable.

Illuminations: A Novel of Hildegard von Bingen by Mary Sharratt
This must have been a free or cheap Kindle book at some point. It's another one that sounds very strange at first glance. It's historical fiction based on the life of a famous mystic nun, who was forced as a child to become a handmaiden to an Anchorite - a nun who is bricked in a tiny room underneath the church for her entire life. Because of her visions, she becomes famous and tries to creatively use her power to free herself. It was a very powerful story. I didn't even know it was based on the life of a real person until I got to the end - that makes it even more impressive.

Quiet: The Power of Introverts in a World That Can't Stop Talking by Susan Cain
I had heard so many people praise this book. It is a very interesting look at how extroversion became idealized in our society and why introversion has its benefits, too. Every time I take a Myers-Briggs test, I am right on the line between E and I. So, I identified with some of the stuff in the book but not all of it. I love pop psychology books, so this one's right up my alley.

Tender at the Bone by Ruth Reichl
Ruth Reichl was the food critic for the New York Times for many years. I had read her book about that job, Garlic and Sapphires, and really enjoyed it. This one was about her childhood and young adult life (in the 60s and 70s). And, wow, she lived a fascinating life. She's done so much traveling; it made me jealous. The scenes with her manic-depressive mother are darkly humorous. She does share some recipes with each little vignette, but I found the focus to be much less on the food and more on the people in her life. 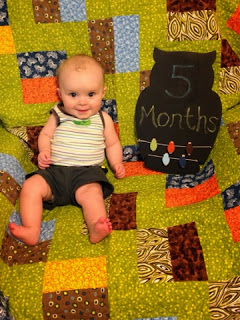 He didn't really hit any big milestones this month. Of course, we can see him getting more interactive and better able to manipulate things each day, but he didn't do anything "big" this month. 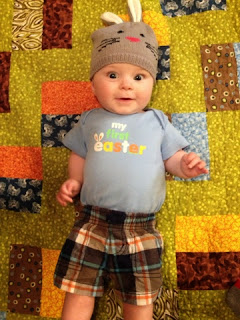 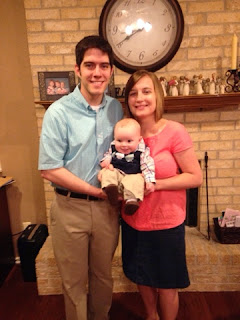 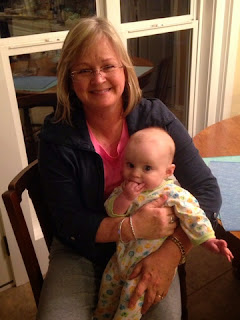 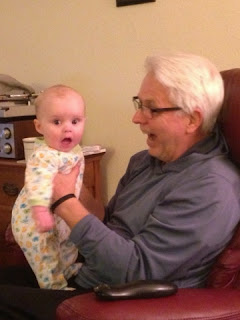 I feel like there are a lot of aspects of motherhood that have surprised me. I had a lot of expectations based on what I had heard and read about motherhood, and my experience hasn't always aligned with those expectations (in good ways and bad ways). I'd like to share some of my thoughts to show that there's not just one way to experience motherhood. And just to be clear, I love Jonas and I love being his mom. But I want to be honest about the hard parts as well as the good parts.

So, there's some of the things that have taken me off guard in the first 5 months of parenting. In the midst of the cute Jonas pictures and anecdotes, I want to make sure I'm keeping it real as well. I'd love to hear from other parents about ways your experience differed from your expectations.
Posted by Kayla at 10:22 PM No comments: