I am an opinionated person and am generally unafraid to speak my mind. This has gotten me into trouble more times than I care to admit. I am trying to do better at thinking before I speak, but it is tough for me. There is one instance that sticks out in my mind as one of my worst truly accidental "open mouth, insert foot" moments. I had no mean intentions AT ALL. So, continuing the theme of stories from my childhood, here goes . . .

My sister and I both took piano lessons for about 7 years. Our first piano teacher would have theme recitals, where you dressed up according to what music you were playing. When Hannah and I were about 10 and 12, the theme was "Movies." I was playing songs from "The Entertainer," and Hannah was playing songs from "Winnie the Pooh." (This post will discuss Hannah's costume; the story of my costume might be discussed in a future post—Title: "My Brattiest Moments.") So, Mom had sewn Hannah a Winnie the Pooh costume. Back then, Hannah was a little pudgy—very cute, but definitely still had some baby fat. Anyway, she came out in her costume and asked how she looked. I, trying to be helpful, said, "Maybe you should take the pillow out of your stomach. It looks too big." Her face fell as she sobbed, "I haven't put the pillow in yet!." Oops. I tried to rectify the situation by explaining that it was just the fabric that was sticking out. Yeah, that didn't help too much. The damage was done.

I was telling this story at our women's Bible study a couple of months ago, and I started laughing so hard that I couldn't even talk. I was just picturing little Hannah in that costume and how her face just fell. She was so pitiful. And she really was such a cute girl. I went looking through my old photos just to find a picture of her in that Pooh costume. I haven't been able to scan photos for about a year, but I repaired my scanner (an hour-long process) just so I could share this. I bet Hannah's going to love me. She's partially blocked by a microphone, so you can't see the full costume, but you get the idea. 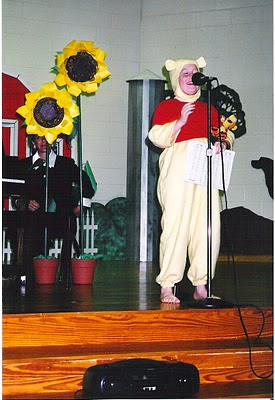 Now, since I've done this to Hannah, I will share the story of my costume (which is embarrassing in an entirely different way). That story to come soon.

It only took 2-1/2 years (3-1/2, if you consider that I started shortly after we got engaged), but I finally finished my wedding scrapbook! I considered putting this as one of my "goals before I turn 25," but I've had it as a goal so many times and failed to meet it that I was too embarrassed. For the most part, I'm pleased with it. There are a few pages that I wish I had done differently, but finished is better than perfect, right? Below are a couple of my favorite pages. Pictures of pages in page protectors really don't come out too well, but I just thought this post could use some pictures. Trust me that they look better in person. :) 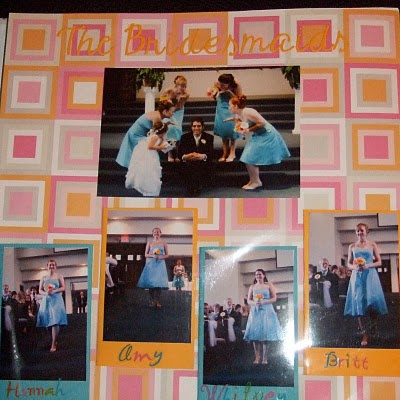 Each of the little cards for the bridesmaids opens up, and there's a description of why I chose them to be my bridesmaid. I'm going to cut around them so you can open up the flap even with the page protector on. I just have to find my exacto knife (and convince Darby to cut it for me, since I will probably mess it up!) 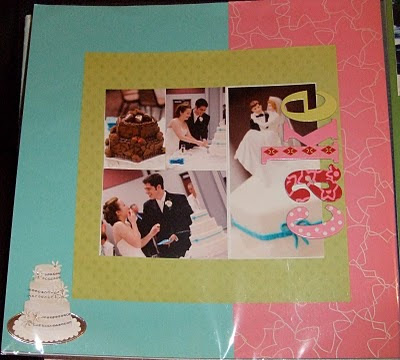 It's only Tuesday, and this has already been a great week.

Last semester, I attended a women's Bible Study on Monday nights. We always began the study with an icebreaker question. For some reason, these questions seemed to bring up all sorts of stories from my childhood, so I would often share. After one particular story (the one I'm going to share here), someone said, "You should write a book with all these stories." Although I don't think I have enough material (or sufficiently interesting material) to fill a book, I decided I could share some of these stories on my blog. And who knows? Maybe one day, I'll be famous and then people will pay to read them. :)

In the later-elementary and intermediate grades, I was obsessed with "The Baby-Sitters' Club" series. I was a member of The Baby-Sitters' Club Book Club and would receive 3 new books each month. This was a passion that my best friend, Whitney, also shared. Naturally, when The Baby-Sitters' Club movie came out when were about 11, we had to go see it in the theater (which almost didn't happen because someone got stabbed while we were waiting in line for the tickets, but that's another story). In our minds, the movie was AWESOME! So, we made a little wager: Whoever got the movie on VHS first got to be Dawn (our favorite character), and the other one would have to be Mallory (our least favorite). Now, just exactly what "being" a character meant, I can't tell you, but at the time it was super important.

A few months later, my mom and I were at the Scholastic warehouse in Waco, and I spotted the movie. Overcome with excitement, I rushed to show my mom. She, aware of the little competition, suggested we buy two copies—one for Whitney and one for me—so that both of us could be winners. I scoffed at my mom's soft-hearted nature; I had to win! I don't remember if my mom ultimately convinced me to get two copies, but I do know that I still laid claim to the fact that I was first to get it. Evidently, Whitney wasn't too hurt by my selfishness because we watched the movie together at least a dozen times and could quote the first 20 minutes or so (all the characters' lines, word-for-word, without ANY prompting; how sad is that?).

When I told this story at our Bible story, one girl said, "Ahhh, so that's when your competitiveness began." Busted! Although, in my defense, Whitney was pretty competitive herself. We spent probably a quarter of the time we were together arguing about something or other. But we loved each other! If I did write a book about my childhood, Whitney would be in a lot of the stories. We were huge dorks; I'm so glad we had each other.
Posted by Kayla at 9:44 AM 2 comments:

New Year's Day has always been one of my favorite holidays. It's so low-key. You just get to laze around and eat yummy snack foods. And this year it's even better since it's a 3-day weekend. Darby and I spent New Year's Eve at our friends' (Jon and Katy) house. We played Rock Band, which is AWESOME! I can't believe I just discovered it. Other than that, we've just been spending our gift cards, unpacking our Christmas gifts, playing games, and doing a little cleaning. It's been great.

I love making New Year's resolutions. This year, I've kind of already made them (my list of things to accomplish before my 25th birthday). So, I thought now would be a good time to give a little progress update on those.