I'd say this was my favorite month yet. Jonas is happy most of the time and interacts with us a lot more. He went through a clingy phase for a little while where he didn't want to let me cook or work on anything while he was in the room. Now, though, he's able to play pretty independently with his toys, with some occasional squawks for me to come over and mess with him. He's such a good-natured baby and will still go to anyone happily. I know people always exclaim over all babies' cuteness and sweetness, but I can't help but feel that the comments are a little more sincere when they're about Jonas. :) I'm proud to be his mom. 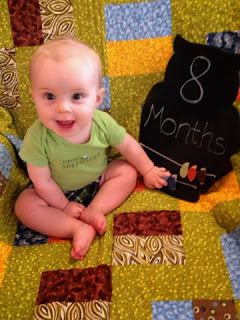 "Firsts"
Things I Want to Remember