Since I recently celebrated my 28th birthday, I thought I should check in on my goals. Actually, I haven't thought much consciously about them this past year, so I'm happy to see I accomplished some of them anyway. 3 years might be a little long for goals to hold my attention. :)

Hobbies
5. Learn to sew
6. Create a card stockpile (I did this last summer, but then I depleted it. I need to keep it going.)
7. Start a successful container garden
8. Take piano lessons

Finances
9. Save 10% down for a house
10. Increase retirement savings to 10% of our income per month (I'm up to about 5% from nothing.)
11. Increase percent saved on groceries each month to 40% (I was doing really well on this for a while, but it's kind of gone by the wayside. I need to get back on track.)
12. Get life insurance for both Darby and me (We've reeeally got to do this, now that baby's on the way.)

Cooking
16. Learn how to cook steak (This was easier than I thought. The secret: buy a good steak. :) Who knew?)
17. Take a cake decorating class (This was kind of a flop.)
18. Completely replace 3 storebought staples with homemade versions (I've replaced salsa, and I'm working on chicken broth.)
19. Whittle "to try" recipes to under 100 (I feel like this is one step forward and two steps back sometimes.)

Health
20. Switch to antibiotic-free animal products (I've switched to organic milk and eggs, and I'm working on beef. I'll post more about this sometime.)
21. Maintain my goal weight (except, see 23 below)
22. Take four different fitness classes (I did KickFit, yoga, strength, and RIPPED.)

Friendship
28. Plan/attend three Fat Tuesday reunions (I've done one big one and one smaller one.)
29. Plan/attend at least two reunions with my high school friends (We did one last September and are doing another this September!)
30. Start/join a book club
Posted by Kayla at 3:00 PM 1 comment:

So, as most of you know by now, I'm pregnant! I'm 14 weeks along, and Baby H is scheduled to join our family around Dec. 18. We decided not to share the news publicly until after my first ultrasound at 12 weeks. We spilled the beans early to our immediate families and some close friends, but, of course, I couldn't post about it at the time. Now that the news is out, I thought I'd go back and post a little bit about those first few weeks, mainly for my benefit when I'm looking back.

I found out I was pregnant on April 10. We were very excited, but, since it wasn't a surprise, our reactions weren't anything like what I had imagined based off of TV and movies. Imagine that, real life is different from TV. :) We didn't tell anyone for another month, and that month was difficult for me. I've heard people say before that they really enjoyed the time when only they and their husband knew about the pregnancy; it was like a fun little secret for them. Not so for me. I was dying to share the news with others. It was weird having the biggest thing going on in my life be a complete secret. The hardest person to keep it from was my mom. I dreaded talking to her on the phone because I just wanted to blurt it out. Luckily, she and my dad went on a two-week vacation during this time, so we were out of communication much of the time.

We wanted to wait until about 10 weeks or so to tell our families, but my parents came up for graduation at 8 weeks, and I just didn't think I could keep it a secret from them in person. So, we decided to go ahead and tell. My mom's birthday was right before graduation. She collects Willow Tree angels, so I got her the "Grandmother" one. As soon as she and Dad got to the house, I had her open her gift. She got what it was right away, and her reaction was very sweet. Dad had no clue there was anything special about the gift, so he was like, "What's going on? Ohhhh..." 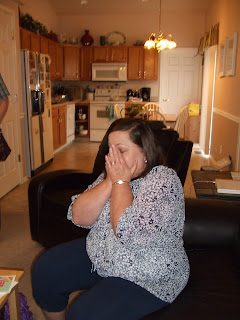 We tried to call Darby's parents the next day, but they were too busy having fun in Austin to take our call. :) So, we told them on Mother's Day---appropriate, I think. A few days later, we received our first congratulations card from them. That made it seem even more real.

At the end of May, my brother and sister both went to my parents' house to celebrate several May birthdays. I decided that would be the perfect opportunity to tell them. I sent them each a gift. It was a pound of coffee with a little tag attached that said "Baby H is brewing. Coming December 2013." I was afraid they would be suspicious when they got the gifts, since it wasn't Matt's birthday. But my mom played it off really well, and they were totally surprised. Dad captured their reactions on video, which is priceless. The coffee happened to be called the "Jean-Pierre" blend, so "JP" became the baby's nickname.

After everything looked good on our ultrasound, we shared the news with our extended family and friends, then made it "facebook official." It's been wonderful to share our excitement with others, and everyone has been very sweet and supportive. Little JP is going to have wonderful grandparents, aunts, and uncles, and lots of friends.

So, I'm really losing my motivation to blog, as I guess is obvious from my sporadic posting lately. I guess part of it is that I've been doing very little in the past three weeks since graduation. I had a nice long break between the end of the semester and the beginning of my summer teaching job (this week). And, don't get me wrong, I was thankful for it. But I just do not do well without a routine. In general, I'm a pretty self-motivated person, but when I have long stretches of free time, I end up not doing much of anything. It's strange. I did manage to get all my winter clothes put away (and my puffy coat donated---won't be needing that any more!). And I sold a Total Gym that I had gotten for free from a friend who was moving four years ago. Pure profit. It had never been reassembled, of course. :) I've also made it to level 84 on Candy Crush, so that's a pretty big accomplishment. Do NOT, I repeat, do NOT get started on that game unless you want it to take over your life.

Here's a few pictures from the last 6 weeks or so to kind of play catch up.