This week, I read Animal, Vegetable, Miracle by Barbara Kingsolver. It is the story of one family's attempt to eat only locally grown produce and meat for a year. It was entertaining, informative, and thought-provoking. Kingsolver definitely has a political agenda, as evidenced in this and other books, so I took some of the information with a grain of salt. However, overall, I think she made some very good points. I have always been very skeptical about organic produce. It is so expensive, and it's unclear to me how much it actually differs from other produce. Well, turns out my skepticism was somewhat founded. "Organic" food from large, national companies is very loosely regulated and often not substantially different from other produce.

Which is one reason Kingsolver advocates locally-grown food and/or maintaining a personal garden. When you know the farmer, you can be sure that his or her products are actually organic and that the workers are fairly paid. Another big concern of Kingsolver's is reducing fuel consumption. Each item in a typical American meal has traveled an average of 1,500 miles. The number of calories expended in producing, packaging, shipping, and refrigerating food can often be hundreds of times the calories available in the food itself. Some of this is understandable for foods that don't grow well in the Northern hemisphere, for example. But, the U.S. imports 1.1 million pounds of potatoes and exports 1.4 million pounds. That seems a little ridiculous, even to a non-tree hugger like myself.

The information about cattle and chicken farming was particularly disturbing. Animals are often forced to live in tiny cages, eating their own excrement and the by-products of their own kind. This greatly increases risk of disease, especially mad cow disease. The UK now tests 100% of its cattle for mad cow. The U.S. tests less than one-half of one percent. Yikes.

I'm not sure exactly what I'm going to do with this information. I try very hard to keep our grocery budget low, and the prices at our farmer's market seem high to me. But, I could probably cut out some other items in order to afford more local produce and perhaps some grass-fed beef or free-range eggs. I could not rely solely on locally-grown produce, though. First of all, Illinois' growing season is fairly short. Second, I could not give up tropical fruits like bananas or pineapple completely. I will definitely look into the issues raised by this book more (in some less-biased sources) and take some baby steps toward changing our food habits.

If you're interested in gardening, cooking, or where your food comes from, I highly recommend this book. While I think sometimes it leans toward "the sky is falling" thinking, (the author predicts near-starvation conditions in the not-too-distant future due to the lack of biodiversity and fuel shortages), it does present a great case for growing your own food, eating more whole foods, and supporting small farmers. It also includes some good recipes.
Posted by Kayla at 10:08 PM 4 comments:

Darby and I went out last night to celebrate him passing his qualifying exam and me getting into grad. school. We went to Jim Gould's, a nice restaurant in downtown Champaign. It was really good! We decided to get dressed up, even though it wasn't necessary. I wanted to wear my new dress I got on clearance at Ann Taylor Loft. I used the last of my gift card money from Christmas to get it. I believe that's the longest I've ever held on to a Christmas gift card; usually they're gone in 2 weeks! (Sorry for the fuzziness of the picture. It was underexposed, and I had to fix it manually, which makes it fuzzy; can't decide which is worse.) 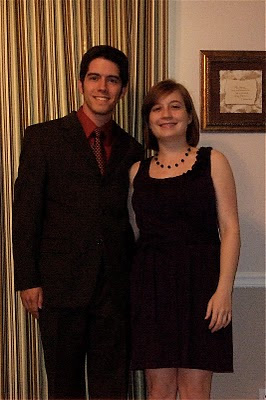 I went and saw Letters to Juliet with my friend Megan yesterday morning (yeah, we went at 11:35 a.m.---we're that cool). It was really cute. Totally predictable, but who goes to a chick flick to be surprised?

Tonight is the LOST series finale. I've NEVER been this excited for a television show before. It is comparable to the excitement I had when the last Harry Potter book came out. I'm so nervous. What if it's not resolved satisfactorily? What if I still have questions that I'll never get answered? I don't know if I can handle it. I know Darby is probably happy it's ending. Every Tuesday night for the past 4 months, I've been rehashing the show with him for hours (sometimes days) afterward. He does not like to speculate like I do, so I get a lot of "uh-huh, hmmm, ok." It's probably better for both of our sanity that it's ending.
Posted by Kayla at 3:56 PM 4 comments:

Well, with only one month to go, I'm pretty proud of my progress toward my goals. There are a few that probably aren't going to happen, but I definitely think I accomplished more things than if I hadn't written goals at all. And, I accomplished my most important goal (#4), so the rest are just icing on the cake. I think I'm going to do this every year. Below is an update on my progress. The ones I'm completely finished with are in bold.

I feel like I have been cooking constantly lately. Or, at least, the dishwasher has needed to be loaded and emptied constantly. Is it sad that with only two people we could seriously use two dishwashers?

I made these Fruit Bruschetta from Our Best Bites for my friend Megan's wedding shower. They were a big hit and very yummy. They are perfect for a wedding or baby shower. (Although Darby enjoyed the leftovers a lot, too; they're not just "chick food.") 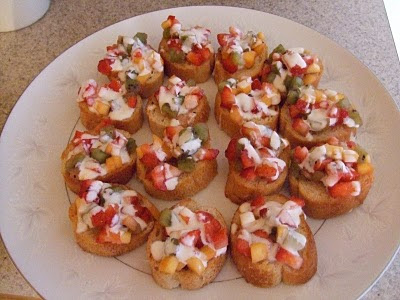 As you might remember, I've been on a quest for the perfect homemade salsa for about a year. Well, I think I finally found it. It's this recipe from The Pioneer Woman. And the secret ingredient is Rotel. I never would have thought to add that, but it does give the salsa a nice kick without too much heat. I tweaked her recipe just a little. I added only one can of Rotel (because my food processor is not big enough for two), and I did drain some of the juice from the tomatoes first. You can always add the juice back in if the salsa is not the right consistency.

We've been enjoying the salsa with these taquitos from Our Best Bites. If you haven't noticed, I love Our Best Bites; it's probably my favorite food blog (and I read a ton). Every recipe I've tried from them has been delicious. They're usually simple enough to appeal to everyone and to make on a weeknight but unique enough to make for special occasions.

Have you made any good recipes lately? Please share. I have 300 online recipes bookmarked to try, but I'm always eager to add a few more. :)
Posted by Kayla at 7:19 AM 1 comment:

So, I saved a lot of my textbooks from college---mainly literature anthologies. I wondered what was the point of selling them back to the bookstore for pennies on the dollar when I could keep them and own so many great works of literature. Well, for the past 3-1/2 years, they have sat on my bookshelf, unopened. I have moved them twice (and they're not light). Every time I walk by the bookshelf, I feel the burden of my own unmet expectations. Did I really think I would one day get the urge to reread "The Love Song of J. Alfred Prufrock" or "Measure for Measure"? I'm more likely to reach for Julie and Julia or Better Homes and Gardens than The Norton Anthology of Poetry. Who was I kidding? I also had the idea that one day my kids might need them for school. But then it occurred to me that by the time I have any kids in college, the books will be at least 25 years old. And I actually hope none of my kids want to follow in their mom's footsteps---better to be interested in science like their dad. (If their interest is English, I won't discourage them, but, let's face it, people who are interested in and talented at science are positioned much better for the job market.)

So, last night, I decided enough is enough. I'm going to get rid of these books and the guilt that goes along with them. I looked two of them up on Amazon's textbook buyback page. Sure enough, they would take them, and pay me $70! I'm now 20 lbs. lighter, $70 richer, and have a foot of extra space on my bookshelves to fill with "low-brow literature." Ahhhh...that feels better.
Posted by Kayla at 11:37 AM 5 comments:

Anything to save a buck

This weekend, Darby and I went up to Chicago to visit my dad (who was there on business) and Darby's brother and sister-in-law (who, coincidentally, were vacationing there at the same time). My dad treated us to dinner on Friday night. (Giordano's pizza—yum! Our favorite Chicago pizza yet.) After we dropped him off at the airport Saturday morning, we had some time to kill before meeting Jeremy and Janice for dinner.

We didn't want to spend much money, so I looked around for free stuff and found out about the Chicago Botanic Garden. Admission is free, but parking is $20 per car! We decided we'd try to find somewhere else to park and walk in. We drove around Glencoe for a while until we saw a sign pointing in the direction of the entrance. We turned onto that street and decided to park at a school and walk from there. We walked and walked and walked, seeing no sign of the gardens. We then reached a street that I thought I remembered seeing online. So, we turned and walked and walked some more. Finally, we found the entrance. We had parked a little over a mile away! :)

The gardens were absolutely beautiful—lots of tulips and crabapple trees in bloom. After several hours of walking around, we were pretty tired, and we knew we still had the walk back to the car. (Did I mention I wasn't wearing tennis shoes?) We made it, though. We were planning to go to Evanston to walk around the Northwestern campus afterward. But my feet were hurting so much from the walk that we just ate lunch and then sat in a coffee shop and read the rest of the afternoon. I think it was worth it to save $20, but next time we plan something like that, I'll definitely wear tennis shoes.

After resting, we met Jeremy and Janice at Katerina's, a jazz club/restaurant, for dinner. Both the food and music were only so-so, but the ambience was good, and it was nice to get to spend a little time with J & J. We drove home late Saturday night. It was a tiring weekend, but a lot of fun. We are lucky to live near a fun city that people want to visit! I'm not sure we'd get near as many visitors (except our parents, of course!) if we lived in Idaho.
Posted by Kayla at 5:20 PM 2 comments: