Well, 3 months later, here are the details for posterity.

It was very important to me to have a party for Jonas in Abilene because I want to set a precedent early of celebrating his birthday separately from Christmas. Even though Jonas has several baby friends, we decided to keep his party to just family. I think it was a good decision for us. I tend to get overwhelmed when we have large groups over, and each toddler counts for about 10 people, I think. I was much more sane with a smaller group. My parents, Hannah, Matt, Leila, and my Uncle Al and Aunt Lea came. Unfortunately, Darby's parents weren't able to make it because of a previously scheduled trip, but they gave Jonas his presents over Thanksgiving.


Although I didn't want to go overboard, I did have to have a few decorations. I chose sock monkeys as the theme because Jonas has a few sock monkey toys, and Darby and I like them. I made a little banner with Jonas's monthly photos and another little banner for Jonas's high chair. I ordered a $15 downloadable party pack that had invitations, labels, etc. 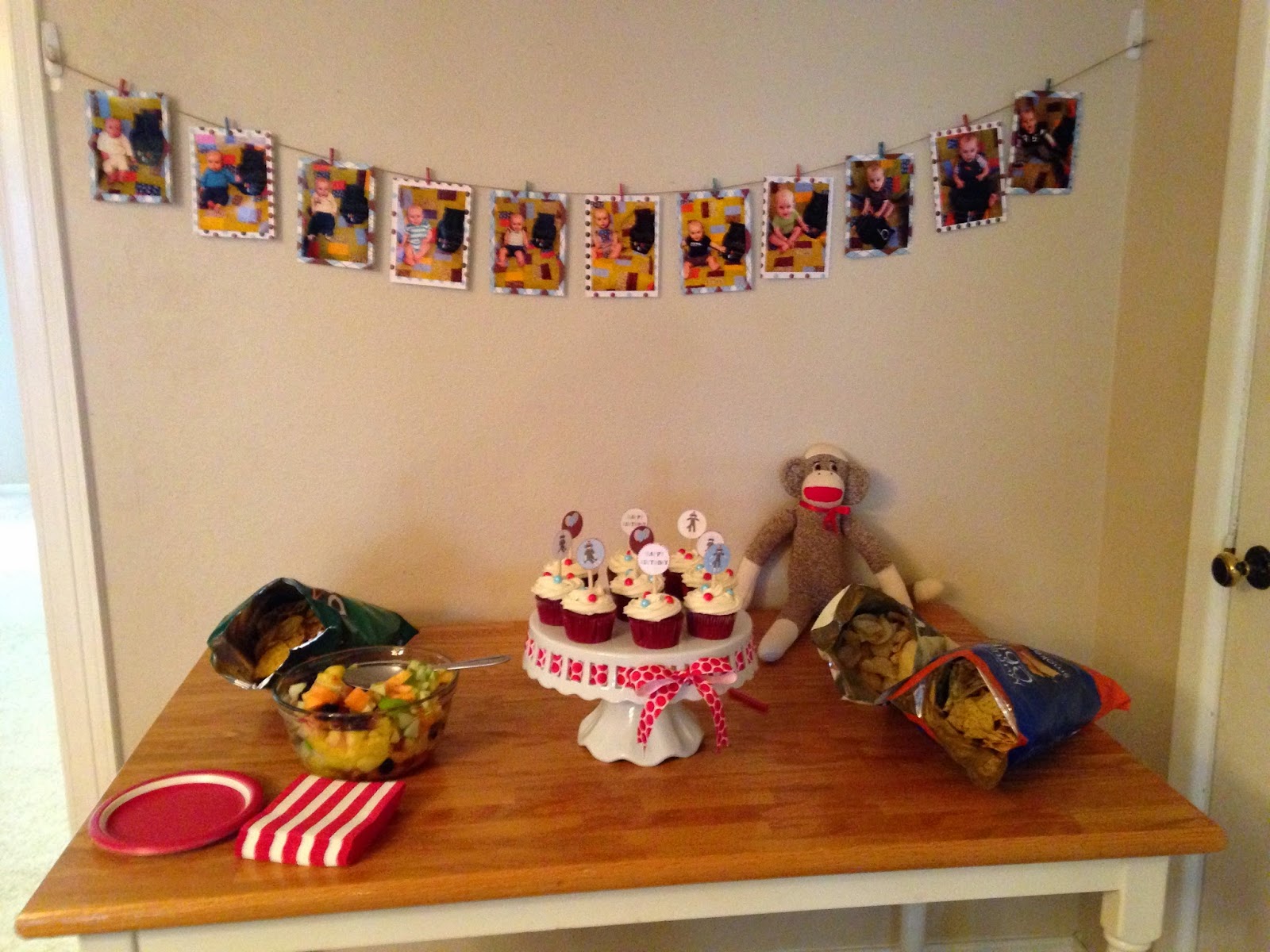 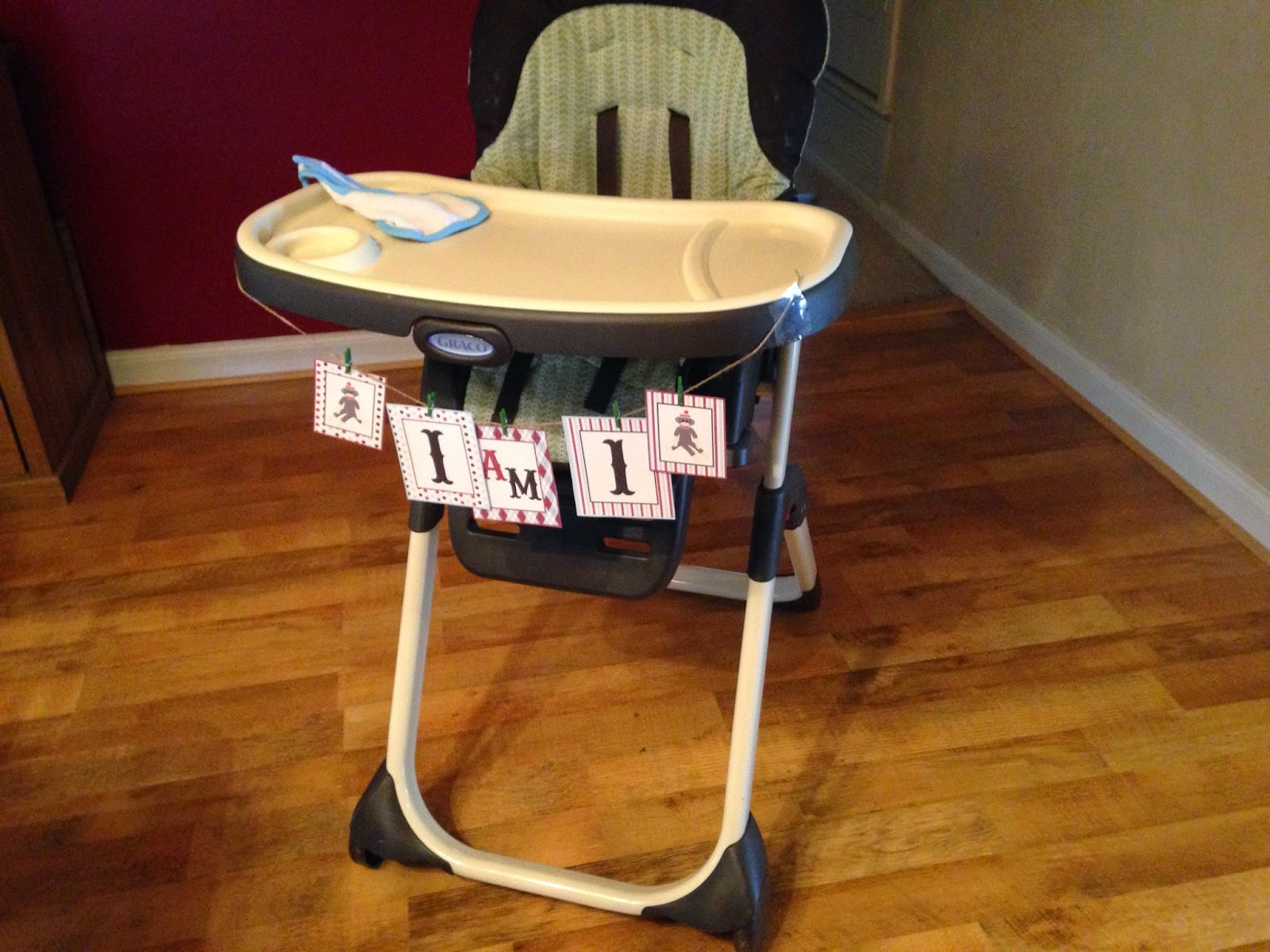 We had a grilled cheese bar, which was really delicious and fun. And super easy for me. I highly recommend it as a party menu. I just got a bunch of meats and cheeses and provided different topping options (pear, apple, caramelized onions, jalapenos, tomatoes, pesto, bacon, basil, etc.). 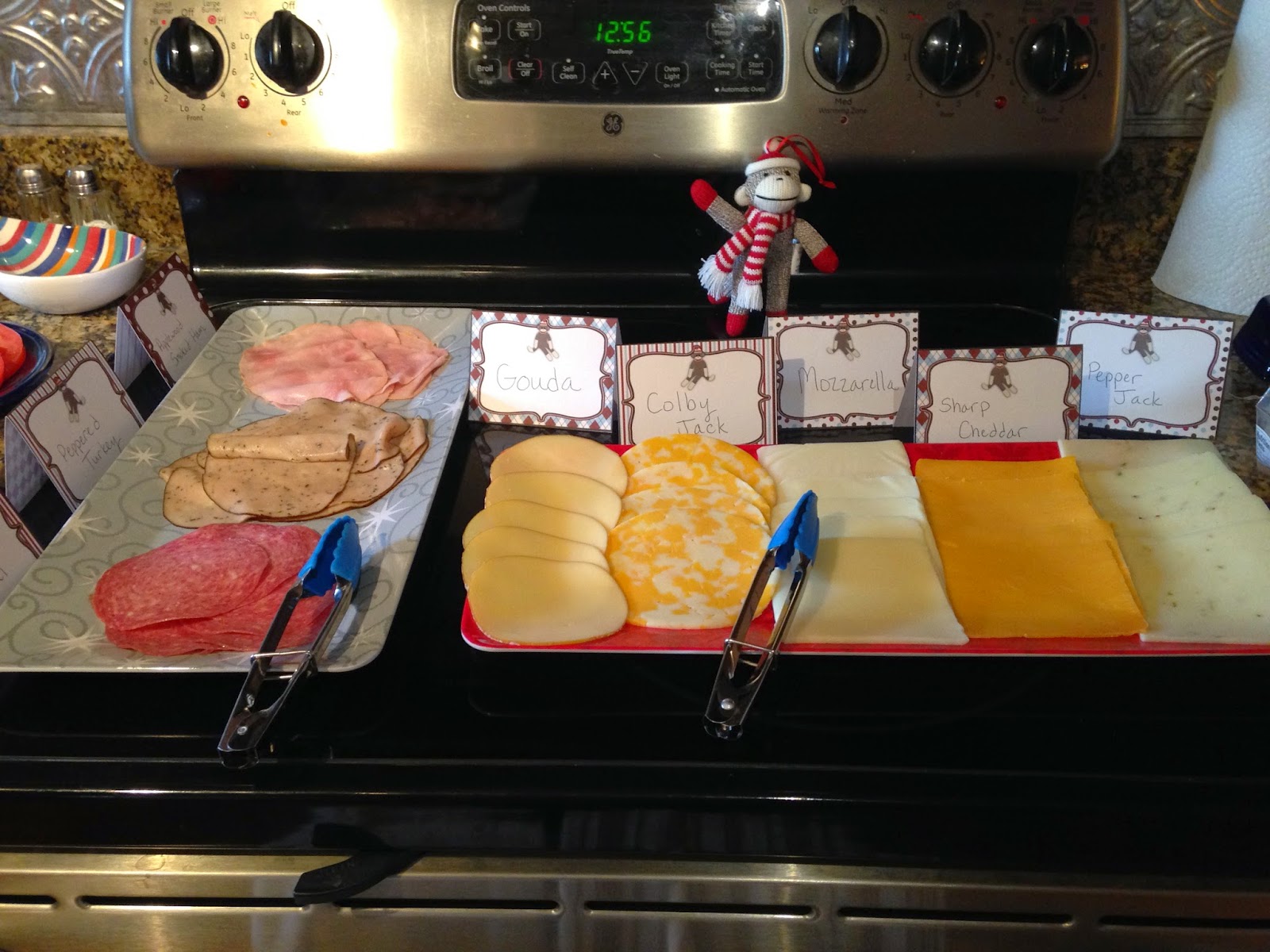 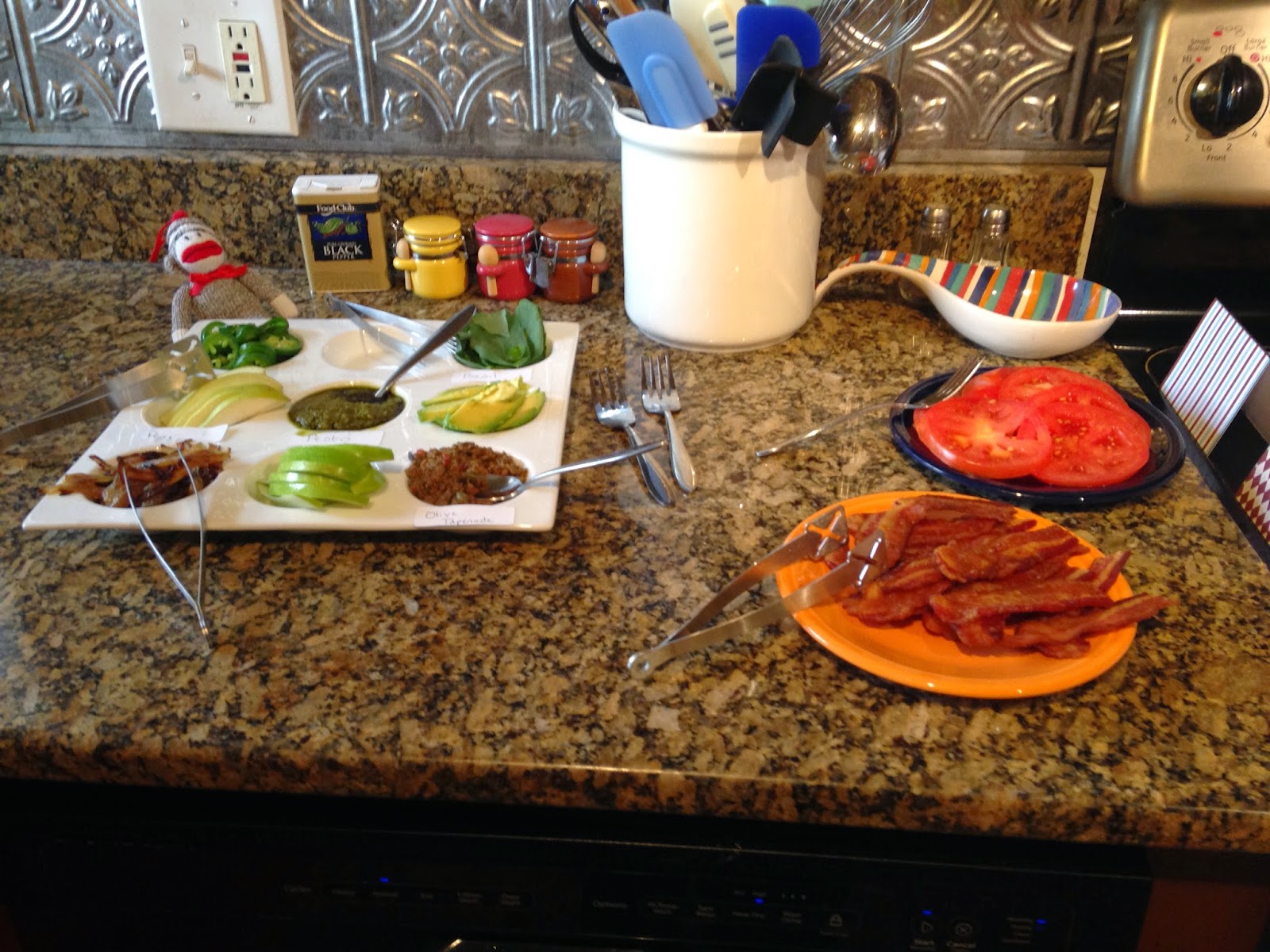 For dessert, we had red velvet cupcakes with cream cheese frosting. While I thought about somehow trying to create a monkey face with frosting, I decided that would most likely end up as a Pinterest fail. Instead I used the picks that came in my party pack. Best decision ever. I spent 10 minutes decorating the cupcakes, and they looked way better than they would have. 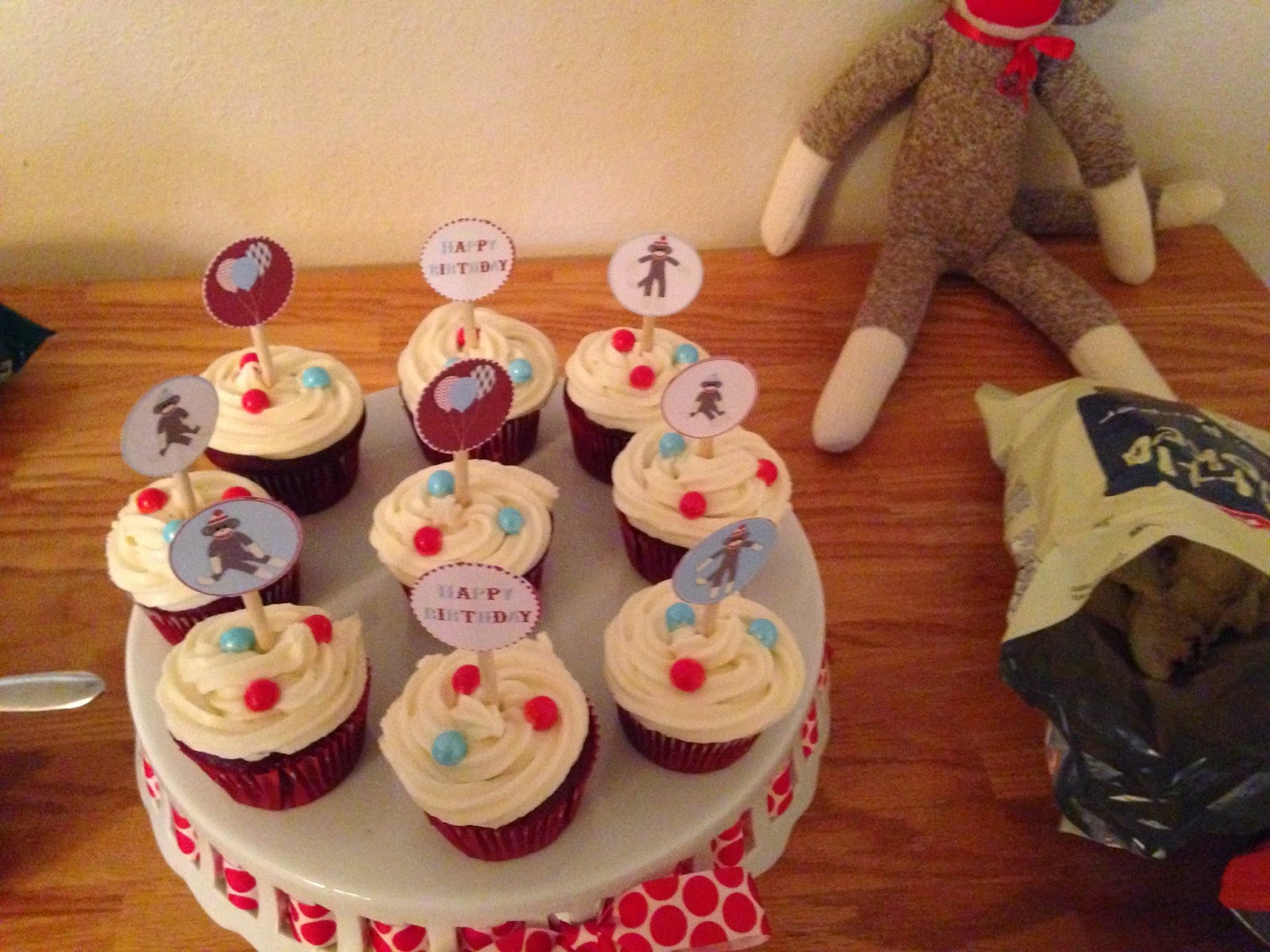 Jonas got lots of great presents. He wasn't too into opening them. And he was a little scared of the rocking horse G-ma and Papa gave him. :) But since the party, he's enjoyed playing with everything. 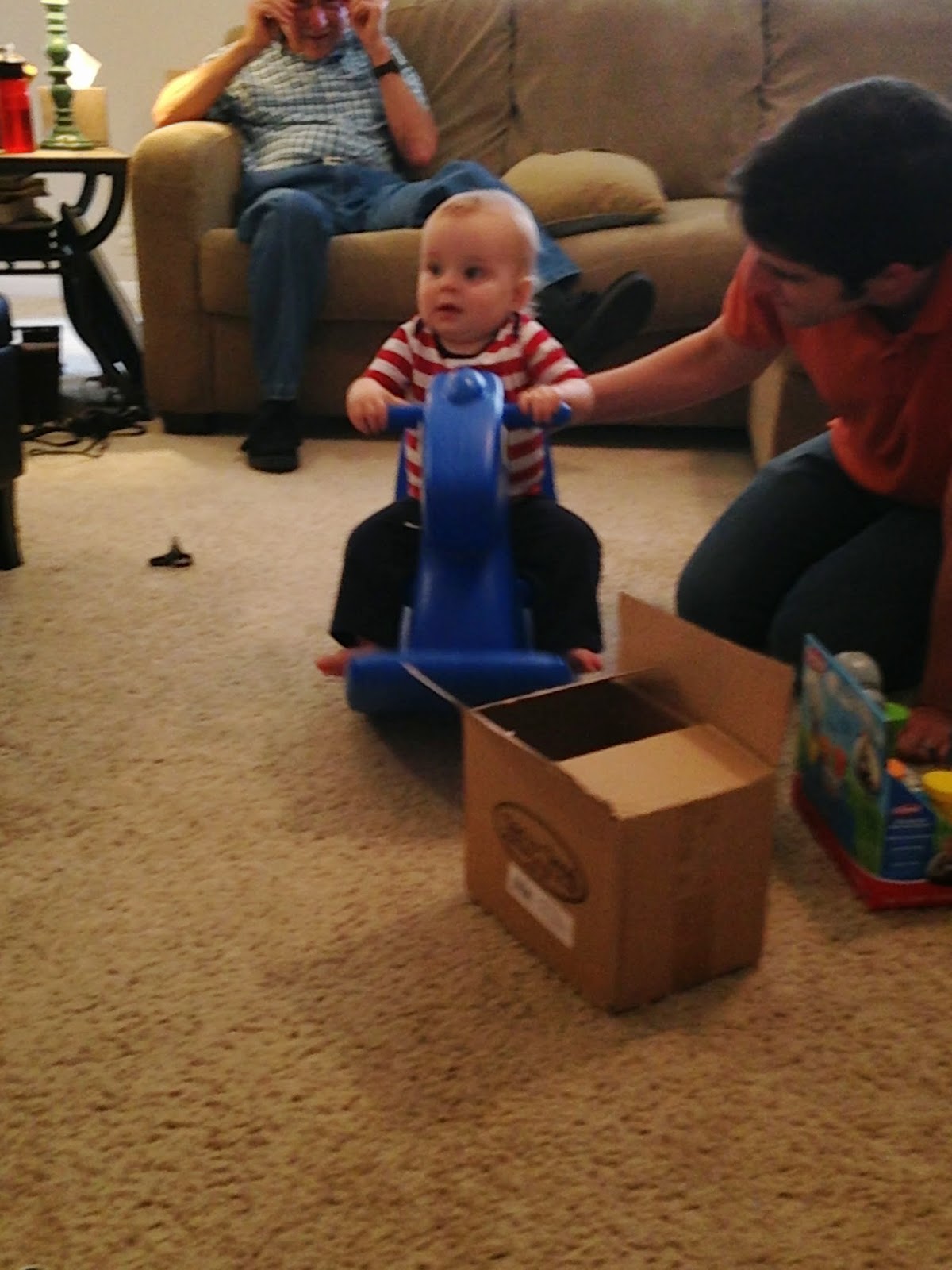 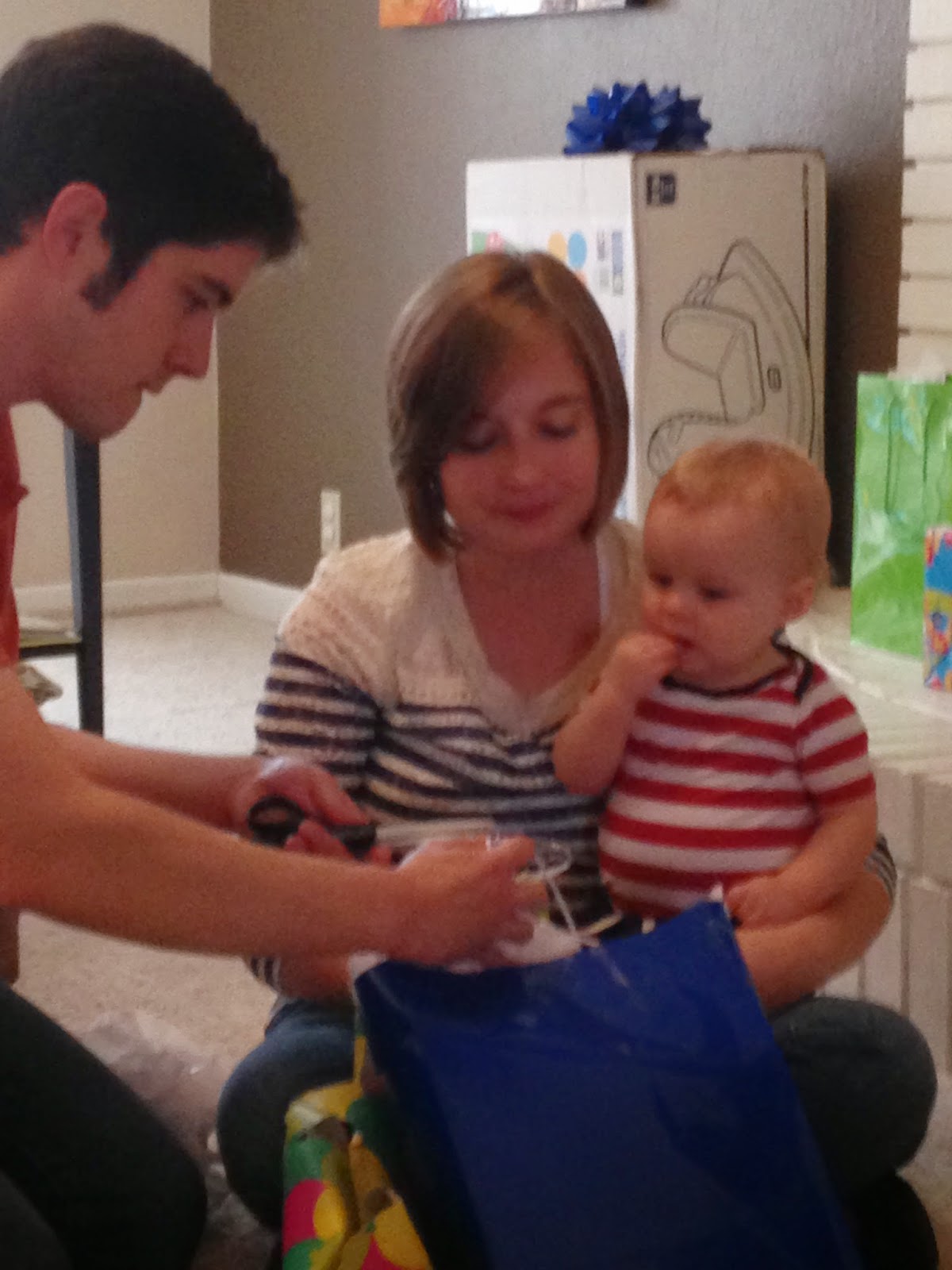 It was such a wonderful afternoon celebrating our little boy. I really don't think the party could have gone any better. It was the perfect mix of low-key yet still special. I'm so thankful for everyone who loves Jonas.
Posted by Kayla at 10:40 PM 1 comment:

Ok, so my blogging more than once a month thing obviously hasn't panned out well. I've been meaning to post about my New Year's goals since the beginning of the year, but I just haven't made the time.

I love goals, so I love New Year's resolutions, even though I'm not necessarily better than the general population at keeping them. For the past several years, I've been focusing on my "30 before 30" goals. I've since realized that 4 years is way too long to maintain a goal list. Many of them are no longer applicable, and I just got kind of bored. So, I've decided to abandon those. I did all the ones that were really important to me, and I'm ready to move on.

In the past, I've participated in the "one word" movement and chosen a word to focus on for the year. That kind of broad focus appeals to me. Since having Jonas, I've come to the realization that there's never going to be a perfect time to do the things I want to do. I've been making excuses for most of my adult life: "when I get done with college, when we have more money, when we get done with grad school, when I'm not pregnant, when I don't have a newborn, when we get settled in the new house," etc., etc. I finally realized that life is never going to be not busy. There are always going to be reasons not to do something. If it's something I really care about, I have to make time. So, I think I've settled on this being the year of "now," as in "do it now."

In particular, I'm trying to take advantage of opportunities to help others. I read a blog post over a year ago called "To Be Inconvenienced" that really convicted me about my own reluctance to help others when the opportunity arises. Of course, no one is ever going to need help on a day when I have absolutely nothing else planned. When does that even happen? So, if I hear about a need, I should just step up and do it. I've been focusing on this for a while, and, of course, I'm not perfect, but I have done a lot more than I used to.

While still focusing on that, I'm also trying to focus more on seeking out work opportunities. I really miss teaching ESL. And while I don't think I'll be able to find steady work doing that right now, there are a lot of part-time opportunities that I could be a part of if I put myself out there. While the lazy part of me would rather just sit on the couch, I know I'll feel more fulfilled if I expend the effort to do work that I enjoy.

What about you? What are you focusing on this year? Or is mid-February too late to talk about New Year's goals?
Posted by Kayla at 10:03 PM 1 comment: