For the past three years, I have done a post about how much I love fall in late September or early October. Why break from tradition, right?

We've had our first fallish weather this week, and I'm loving it! I love wearing jackets and my cute socks. (I still only wear patterned socks unless I am working out; I don't think I'll ever outgrow them.) I love eating soup and drinking cider and hot chocolate. I love pumpkin pie, caramel apples, and candy corn. I love getting out my fall decorations and being surprised by things I had forgotten I had. I love not waking up hot in the morning. I love feeling warm and cozy in my hooded sweatshirt. I love that new episodes of my favorite tv shows are on. I love that Christmas feels so much closer but not so close that you start getting sad about it being over.

Growing up, summer was my favorite season, mainly because my birthday is in the summer. But over the past few years, fall has definitely taken its place. Especially now that I'm not in school, summer just doesn't hold the same appeal. So, I'm going to soak up my 8 or so weeks of fall loveliness before winter rears its ugly head.
Posted by Kayla at 10:13 AM 4 comments:

Update: It's Sunday morning now, and I am feeling much better. I thought about deleting this post but decided against it because it is true and honest. I don't want to be all "sunshine and roses" on this blog if I'm not feeling that way. But now I'm off to teach my little babies at church. :)

Well, this little Illinois adventure has been great so far, but I think I'm through. I want to go "home." (Home being within driving distance of my parents' house and/or Abilene.) I actually surprised myself with how well I adjusted to living here, but lately it's been hard. Seeing everyone's updates on facebook about the ACU game makes me wish I was there, tailgating with the Westgate college group and wearing my purple and white. I wish I could see my sister's apartment in Dallas. I wish I could go back and visit the people I worked with at ACU and all of the people we knew from Westgate. I wish I could have seen my parents on my birthday (although I am happy I at least got to be with Darby's family that day.) And the hardest thing of all has been seeing pictures of my friend Em's new baby. I want to see her in person! I'm hoping to get to see her at Christmas, but I don't know if that's going to work out. Darby and I have so little time to see everyone we want to see.

Obviously, I am exaggerating a little. I do overall still really like it here, and I want Darby to finish his degree. And I guess I want to live with my husband. :) But it's hard sometimes. I just wish there was more time to spend with everyone at holidays. We have to cram so much in every time we go home. And it's too expensive to just fly home for a weekend here or there. Part of this rant is precipitated by the nearly $600 we are about to spend on plane tickets for Thanksgiving (that's to drive 3 hours to St. Louis and then fly to Dallas). To fly out of Champaign, Bloomington, or Peoria would be over $1,000. I'm ok with not having much time or not having much money, but not having either really stinks!

Sorry for the rant. I'm sure I'll feel better in a couple of days. And I am really happy that we're able to go home at all this Thanksgiving. Only 2 more months!
Posted by Kayla at 10:15 PM 6 comments:

I recently switched from listening to NPR back to listening to my iPod on the way to work. NPR was making me too depressed and angry (I can get very impassioned about politics). I'll take my "news lite" from The Today Show any day. Anyway, I had forgotten how much I love my iPod. Mainly because I really don't like much new music. Almost all of the songs I have are from 1996 to 2004. The songs from when I was younger just bring back so many good and funny memories.

When I listen to Fuel, I think of the time that Hannah and I had a huge fight because I wanted to listen to that CD every day on the way to and from school. Two guys from church who rode home from school with us were just sitting in the back seat with these stunned looks on their faces. I don't think they had ever seen the way sisters fight. Now, of course, Hannah and I just laugh about it.

Or there's "Whenever, Wherever" by Shakira, which Jessica included on a mix CD she made for our group of friends when we graduated from high school. Accompanying the CD was an explanation of why she chose each song. That particular one said something like, "Just like this song says, I know that 'whenever, wherever we're meant to be together.' " I think she was only joking a little bit. We really were that sappy. I still love those girls.

Alanis Morrissette's Jagged Little Pill was one of the first CDs I ever owned (after Mariah Carey and Celine Dion, of course). Still when I sing along to "You Oughta Know," I sing our altered church van line: "I hope you're thinking of me when you suck on a sucker." The original is not nearly so benign; use your imagination. (This is also a prime example I want to remember when I'm tempted to tell my kids they shouldn't be listening to certain music. I listened to tons of songs that might not have been completely age-appropriate, but I turned out fine. I say, pick your battles.)

Almost every song I have, I can think of some story that goes along with it, usually involving silliness or melodrama. That just doesn't happen with current songs. I don't go on 15-hour van rides with dozens of other teenagers where all we have to do is make up dumb words to songs. (We turned "I Want It That Way" by the Backstreet Boys into a love song about a chocolate chip cookie . . . I have no idea.) I don't dress up with my friends and make up a music video for "Lady Marmalade." (I was Lil' Kim, like you couldn't guess!)

So while I appreciate some new music, it just doesn't make me happy like older music does. And I'm not talking old, classic music. Most of the stuff I liked was pretty cheesy, and I was never picky about genre. So what? I'm proudly admitting that I sing along at the top of my lungs to Boyz II Men, Garth Brooks, Ace of Base, The Offspring, and Shania Twain, sometimes one right after another. They may not be "good," but they sure are fun.
Posted by Kayla at 7:44 PM 3 comments:

Saw this on a few people's blogs and thought it was cute. I can't resist lists or talking about myself. :)

The Office Season 6 starts tomorrow night!! I am so excited. I can't wait to pick up where we left off with Jim and Pam's storyline. They are by far my favorite television couple ever. Darby and I are so close to getting Season 5 on DVD. It came out a couple of weeks ago, but we decided to wait until we each received one more $5 Amazon gift card from Swagbucks. That way, we won't have to pay for much of it out of pocket. It was a good decision, but it's so hard to wait! I'm sure once we get it, we will go through the whole season and all of the deleted scenes in a week or less. That's our style.
Posted by Kayla at 9:55 PM 2 comments:

This week, we went back to our normal schedule at work (8 to 4:30, rather than 7 to 3), which means I'm back to my normal morning routine: I get up and take a shower while Darby makes the coffee; I fix my cereal, and Darby pours my coffee (I'm a little spoiled). We sit on the couch and watch the last 15 minutes of Saved by the Bell and the first 15 minutes of the Today Show while we eat. (I usually also check my e-mail, facebook, etc. What can I say? I'm a multi-tasker.)

I didn't realize just how much I had missed that routine until we started doing it again. During the summer, my mornings were so depressing. I'd get up, get ready very quietly, quickly eat my breakfast, and take my coffee to go. Right before I left, I'd wake Darby up, so we barely got to say good morning before I was out the door (usually running late).

Now, I love my mornings. I get just enough news that I know generally what's going on in the world, but not so much that I start getting angry and/or depressed. And I get to spend a little time with Darby. The only downside is that, since I drink my coffee at home now, I don't get to use my super-cute Hello Kitty thermos that Darby made (yes, made) for me last Christmas. 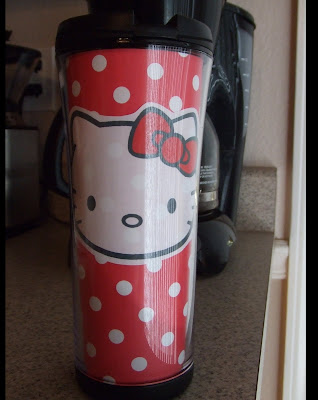 We had so much fun with my parents this weekend. I feel like a real adult having my parents come visit me at my own house. (Of course, I still enjoy the perks of being a kid, like having my parents pay for meals and take me shopping for clothes!)

On Saturday, we drove to Springfield to see some of the Abraham Lincoln sites. We went to Lincon's house, his law office, his tomb, and the Lincoln museum. All were very neat (except the law office, which was pretty much ruined by a hilariously clueless tour guide).

Of course, we enjoyed yummy food. We ate at Dos Reales and Za's, and I cooked grilled chicken skewers and chicken taquitos and made an ice cream pie (which involves layering bananas, hot fudge, and three types of ice cream in an Oreo crust; I used low-fat and fat-free ice cream, so it was healthy, right?)

The rest of the time was spent talking, playing games, and napping. I feel very blessed to have the parents I have. I miss them a lot, and I'm so glad they are willing to come up and visit regularly. Darby and I are counting down the days until we get to see both of our families at Thanksgiving!
Posted by Kayla at 12:33 PM 1 comment:

Sorry for my kind of blah blog lately. I have not been inspired to post. And I'm sure you all just wait on the edge of your seats for my next post. ;) I've thought about posting several times in the past week, but then decided against it, either because what I had in mind was too boring or short. Well, no greater inspiration hit, so without further ado, here are all the things I've mentally composed a blog about:

Next week, I should have a more interesting update. My mom and dad are coming into town for the weekend. Yippee!