I feel like Jonas is beginning to realize that he has power to make things happen. He can definitely throw a fit when he doesn't get something he wants. And he's starting to get picky when it comes to food. Even though I sometimes miss my completely easygoing baby, I like knowing that he's developing into his own person and that he's attempting to communicate with us. And he's still relatively easygoing. His army crawl has gotten a lot more efficient, but he's still generally content to sit in one place. We still haven't had to do much babyproofing and are getting a bit spoiled. 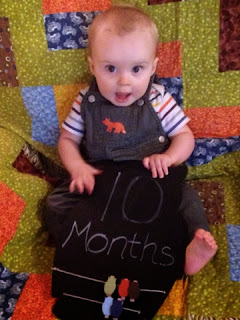 "Firsts"
Things I Want to Remember

It's hard for me to believe that Jonas is 3/4 of the way through his first year. Time is really flying - obviously, since I'm posting this update two weeks late. :)

I transferred pictures off my phone to our desktop computer, so I don't have all of the relevant pictures for this update. I just included some random cute ones at the end. 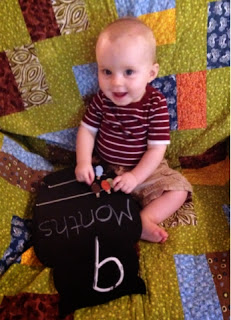 "Firsts"
Not many this month. He's done so much that we're running out of firsts!
Things I Want to Remember