Highlights since we began our trip last Thursday:
Whew. Now that I wrote it all out, it seems like a lot to cram in to 10 days, and I guess it has been busy. But it's been super-fun and fairly relaxing, too. Now, we're getting ready to leave on our CRUISE!! I'm so psyched!

I love everything about the Christmas season: the food, the decorations, the gifts, the shopping, etc. And I don't think it's bad to enjoy those things. But I also want to be sure I take time to remember what's behind the sparkly lights and shiny paper, the true wonder of Christmas. "The Word became flesh and made his dwelling among us. We have seen his glory, the glory of the One and Only, who came from the Father, full of grace and truth" (John 1:14).
Posted by Kayla at 9:37 PM 1 comment:

I really like the second part of this prompt, so I'm going to focus on that.

December 21. Future Self. Imagine yourself five years from now. What advice would you give your current self for the year ahead? (Bonus: Write a note to yourself 10 years ago. What would you tell your younger self?) (Author: Jenny Blake)

If I could give you only one piece of advice, it would be: stop worrying. So many things that seem like a big deal now will not matter at all in 10 years. I know that's hard to believe, but if you can believe it, it will save you so much heartache.

Stop caring so much about what other people think of you. Ten years from now, you will not wish you had been more popular; you will wish you had been more confident. Be kind to the "weird" kids. When you're 25, you'll see the way teenagers treat outsiders, and it will make you so angry. You'll be ashamed to know that, when you were in their shoes, you didn't act much better.

Stop worrying so much about the future. I don't want to ruin it for you, but I don't think you would be able to guess right now who you're married to, where you're living, and what you're doing (and have done) at age 25. Everything will work out. In fact, much of it has worked out in spite of your planning, not because of it. So, relax a little.

When people say high school is the best time of your life, they're either lying or they have a pretty lame life. You'll have a lot of good times during the rest of high school, but don't be discouraged if these years seem difficult. The best is definitely yet to come.

Love,
Kayla
Posted by Kayla at 9:41 AM No comments:

Dec. 3. Moment. Pick one moment during which you felt most alive this year. Describe it in vivid detail (texture, smells, voices, noises, colors). (Author: Ali Edwards)

Hmmm...this is a tough one. I'm not sure if the moment I'm about to describe is the one in which I felt most alive, but it is a small moment that has stayed with me.

One afternoon in October, I was walking home from the bus stop. It was a beautiful sunny fall day, and I was admiring the orange and red leaves of the trees against the bright blue sky. All of a sudden, this verse popped into my head: "The earth is the Lord's and everything in it, the world and all who live in it." (Psalm 24:1). Now, that hasn't been one of my favorite verses, and I hadn't been reading Psalms at the time. I really felt like it was God who gave me that verse in that moment to remind me that I should be praising him for the beauty that surrounds me. I don't have those feelings very often; I have a very intellectual faith. So, I am always grateful when I feel like I have those reassurances of God's presence.

Dec. 10. Wisdom. What was the wisest decision you made this year, and how did it play out? (Author: Susannah Conway)

I think the wisest decision I made in 2010 was to apply to graduate school. Now, I sort of made this decision in 2009. But, the process didn't end until 2010, so I'm counting it. It's my blog; I can do what I want to. ;) The decision was a tough one for me. I went back and forth about what I wanted to do; my confidence had been shaken by my denial the previous time I had applied (for a different program); I had to really push to get all of my application materials in on time. But here's the part of the decision where I think wisdom came into play: I really wondered, "Is it even worth it to go back to school?" Because, when I have children, I plan to stay at home at least at first. So I might not have the opportunity to use my degree in the traditional sense for very long before I become a stay-at-home mom. But I finally came to the realization that I need to make the best decision for my life now because I just don't know what the future will bring. We might not be able to have children. I might stay home for a while and decide I want to go back to work. We might not be in a financial position for me to stay at home. I decided I can't let what might or might not happen in the future prevent me from being happy now. (Obviously this position can be taken to the extreme, such as not saving any money, but I'm in much more danger of the other extreme.) I'm so glad I made the decision I did. I love what I'm doing now. And, I'm realizing that there are a lot of opportunities for part-time ESL teaching and tutoring. So, it will be a great career to have if and when I have children.
Posted by Kayla at 7:48 AM 3 comments:

So, I recently found out about an online project called Reverb '10, which encourages bloggers to reflect on the past year and think about what's ahead by answering daily prompts for the entire month of December. Now, I think it's more of a project for serious writers, which, obviously, I am not. But I'm a sucker for self-reflection (and predetermined blog topics). So I thought I'd take a look at a few of the prompts.

December 1. One Word. Encapsulate the year 2010 in one word. Explain why you’re choosing that word. Now, imagine it’s one year from today, what would you like the word to be that captures 2011 for you? (Author: Gwen Bell)

I think my one word for 2010 would be "purpose". Starting graduate school has really helped me feel that my life has a specific purpose again. I really missed that feeling.

Also, I feel like I really strove to live more purposefully in general in 2010. I set a lot of goals for myself, and I accomplished quite a few of them. One thing I'm really trying to be mindful of is that I have control over my time. I'm trying to eliminate the phrase, "I don't have time" from my vocabulary. Because, really, we all make time for the things we want to do. And I don't think there's anyone who doesn't spend at least some time each week watching TV, playing video games, or browsing the Internet. I don't think there's anything wrong with that, but it just proves the inaccuracy of the "I don't have time" excuse. A more accurate expression is, "I'm choosing not to spend my time that way." Just my little soapbox for the day. ;)

I would like for my word for 2011 to be "contentment." I want to spend less time complaining and more time being grateful for the blessings I have. I want to continue to set goals for myself and achieve them but also remember that my life is fulfilling even if I don't cross everything off my "to cook" list and I have to run around frantically cleaning up every time someone's coming over.
Posted by Kayla at 9:21 PM 1 comment: 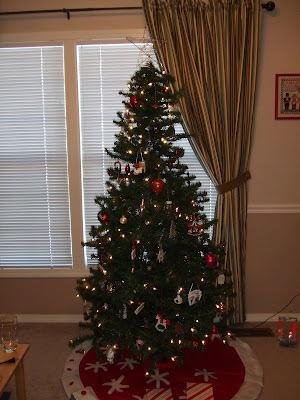 Well, we're in the full Christmas spirit at our house. When we got back from Texas, we put up our tree and other decorations. After Christmas last year, we brought back Darby's nutcracker collection, so we were able to display those this year. I think they look great on our ledge. 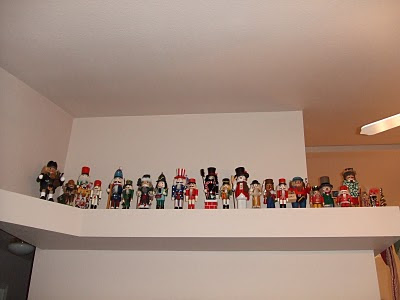 It is looking very Christmasy outside, too. This weekend, we got about 8 inches of snow (they had predicted 1–3). The snow is pretty, and we can actually enjoy it as we haven't had to live with it for very long yet. It is VERY cold (highs around 20 and strong north winds). This is the first winter that I've actually had to spend much time outside. Even with triple layers on, it's a very cold walk to the bus stop. I'm surviving, though.

Last night, we hosted a little Christmas party for our ACU group. After Christmas last year, Debby and I went shopping and she bought me these adorable Christmas plates, so I needed an excuse to use them. :) I fixed a few appetizers and desserts, and it was a lot of fun. 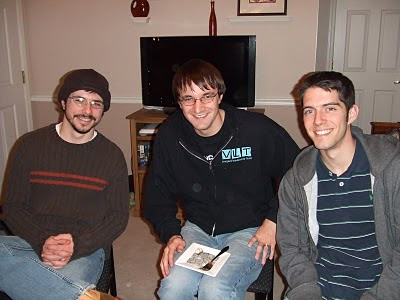 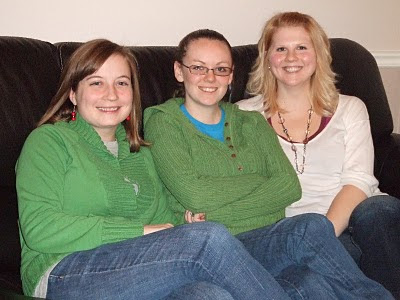