Goodbye, cable (for real this time).

Well, it happened. The cable we had been getting free for over a year finally went away. No, Comcast still never came and unhooked it. But, they changed all their channels to digital, so you can't get them unless you have the box.

The pain has been lessened by the fact that we now have Netflix streaming on our Wii. It's incredible. Darby and I have watched all of the seasons of 30 Rock, Seasons 1-4 of Psych, and are now starting Season 1 of Friday Night Lights. We do work on homework while we watch, so it's ok, right?

The loss of TLC and HGTV were a pretty big blow for me, but I've consoled myself by watching previous seasons of 17/18 Kids and Counting, Jon & Kate Plus 8, and Say Yes to the Dress. Pretty high-brow, I know. I console myself with the fact that I have stayed strong this year and avoided any episodes of The Bachelor. Baby steps. ;)
Posted by Kayla at 10:13 PM 3 comments:

Well, the first week of the semester was a little rough. Classes were fine, but I had a nasty cold, and the weather was not cooperating at all. For the first time, I literally walked to school in the snow. (Well, walked to and from the bus stop.) It snowed ALL DAY yesterday, so no one had shoveled because it was pointless. So I trudged through a good four inches of snow and slush. Good thing I have my fake Uggs. I swore I'd never wear those, but then I moved to the Arctic Tundra and, in my regular boots, the cold was seeping through the soles and making my feet ache, so I gave in and bought some. And oh.my.gosh. they are the most comfortable things I've ever put on my feet. And oh so warm. I never want to take them off. I even wear them around the house with my pajamas. :) It was sunny today, but COLD. Darby asked me to check the temperature this morning, so I went to weather.com and just started laughing. It was -5 with a windchill of -18. There are really only two choices in that situation: laugh or cry. Then, Darby checked the weather thing on his computer, and it said -11 with a windchill of -28. I chose to believe the more optimistic forecast. I survived thanks to multiple layers and the hand warmers from my stocking.

As many of you know, I have long considered myself a feminist. However, my interests seem to lean decidedly to the "unfeminist" side of things. I enjoy cooking, entertaining, and crafts, and I plan to be a stay-at-home mom to some degree when I do have kids. In my mind, feminism and domesticity are not antithetical. As my family has heard me say over and over: "I cook because I want to, not because I have to." But, I still sometimes feel a bit uneasy, like maybe I'm not a real feminist.

And then, on a whim, I picked up The Gentle Art of Domesticity by Jane Brocket. It's a beautiful book filled with photographs and musings on baking, quilting, crocheting, and in general, the simple pleasures of home. The author was educated at the height of the second-wave feminist movement in the 1970s, and domesticity was strongly discouraged. So she entered the corporate world, but always secretly enjoyed the projects she did at home. When her husband got a job in Germany and she found out she was expecting twins, she decided to become a full-time homemaker. Here's what she said about her decision:

Full-blown domesticity was now finally forced upon me and I admit I gave in willingly. Instead of fighting the glaringly anachronistic corporate-wife lifestyle, I realized I didn't have to kowtow to that particular set of expectations. Instead, I saw that enforced domesticity could be tremendously liberating and would allow me to do all the things I had loved for so long and yet had felt guilty about practicing. Knitting, baking, buying flowers and bread, exploring a different domestic culture, reading the Victorian novelist Elizabeth Gaskell--all this suddenly became worthwhile, and a way of being me in the face of impending motherhood and, that dreadful label, a trailing spouse.

Reading this, I felt like someone finally expressed my thoughts on the subject of homemaking, albeit much more eloquently. Now, I am not nearly as accomplished a domestic artist as Ms. Brocket (namely, I don't sew in any form). But, I do enjoy being at home more than anything else. And I'm glad to see a departure from the view that being a feminist means you must be a (preferably single) businesswoman.

If you're interested in baking, sewing, design, or looking at pretty things, I'd highly recommend this book. It's not a "craft book," that is, it does not give directions for craft projects. But it's a great source of inspiration and a fascinating reflection on why the "gentle arts" are so appealing.
Posted by Kayla at 12:27 PM 4 comments:

I figured the first of the year would be a good time to evaluate my progress toward my "26 before 26" goals. I must admit I haven't made quite as much progress as I would have liked. School took up a lot of my time in the fall, and frankly, I just didn't make these a priority. But, I'm still committed, and I'm going to do better from now until June.

We made it back to Illinois last night after a long day of traveling. It was such a great trip, but it is nice to be back in my own bed.

For our Christmas gift this year, my parents treated all of us kids to a cruise. And to make it even better, Darby's parents came, too. (And we are really grateful to Darby's parents for chipping in so Darby and I could have our own room; otherwise, we were going to be divided girls and boys.) We all had a great time; besides the little stomach bug I caught at the very end of the trip, it was a week full of fun and relaxation.

We left Galveston on Sunday on the Voyager of the Seas. It was a little bit chilly for the first couple of days, but we had fun playing games, watching the shows, and, of course, eating.

Our first stop was Cozumel. Dad and I went to a Mexican cuisine cooking workshop. Because there was an open bar (which Dad and I took full advantage of--ha!), there were no knives allowed. So it was less of a cooking class and more of an "assembling" class, but it was still a lot of fun, and the food was yummy. I also got a huuuge bottle of cheap Mexican vanilla. Woo-hoo! 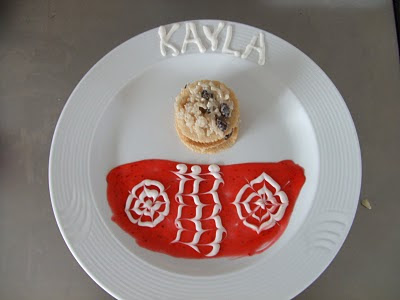 Our instructor taught us some cool decorating tricks. Here's my attempt. I think with a little more practice, I'll get better. 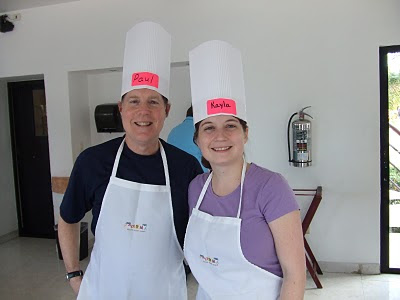 Dad and me in our awesome chef hats.

Our second stop was Roatan, Honduras. It was absolutely beautiful. Darby, Matt, and I went to a wildlife preservation park where you could hold monkeys and macaws. I passed on the monkeys, but, as you'll see below, I did hold a bird. Afterwards, we laid on the beach for an hour or so. 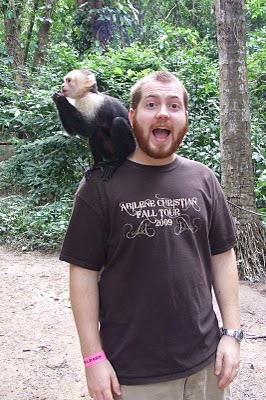 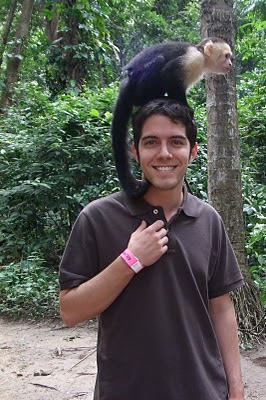 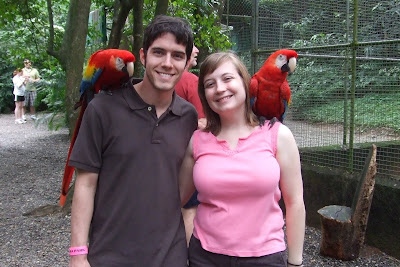 Darby and me
Finally, we went to Belize. Our whole family went ziplining, which was awesome and a little bit scary. Unfortunately, the camera with the zipline pictures on it was lost, so you'll just have to imagine how ridiculous I looked.

Dinnertime was so fun, since the whole gang got to eat together. Our waiter, John, was strictly business. He was training a new waiter, Mu, who was obviously very nervous but so sweet. We celebrated New Year's Eve on the ship. There was a huge balloon drop on the main deck. I couldn't get any good pictures because it was dark, but it was pretty cool. 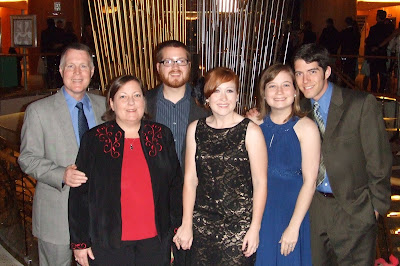 The Anderson fam on the second formal night. (Hannah's boyfriend Jeremy was taking this picture. I'm so glad he was able to come. It was good to get to know him better.) 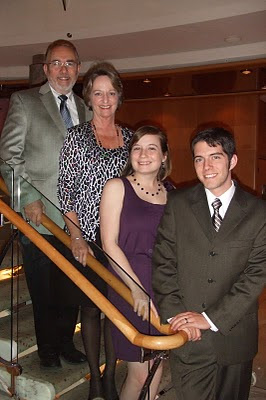 The Hewitts on the first formal night.

It was a great trip, and I'm so grateful to both of our families for treating us. So many people that we told about our trip couldn't believe that our families could get along well enough to go on a cruise together. I guess it is kind of an unusual situation; we are very blessed.
Posted by Kayla at 10:33 PM 3 comments: